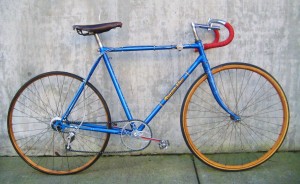 A great bike from the land down under.
This is a Malvern Star.
To be specific, it’s a Two-Star model from the Australian bicycle company Malvern Star.
The bike is a mid-level model that was meant to be fast and tough but not as pretty or as light as the flagship Five-Star model.
I don’t know, this one looks pretty spectacular to us.
Like the ’48 Malvern Star and the 1920′s Arrow Racer that we have in the collection, this one sports an impressive finish. The beautifully painted frame details appear to be the handiwork of Ken Dickie. Ken was an artist who lived in Melbourne and applied his brushwork to some of the coolest bicycles we have ever seen anywhere. Ken worked with a steady hand, a great eye for details and a tremendous amount of patience. 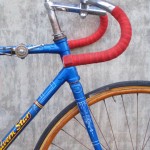 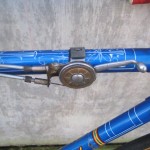 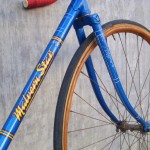 Despite the lack of brakes (Jeff was still working on it when we took the photos), this is a road bike. It had three or four gears to help even out hilly terrain and frame geometry that smoothed out rough roads and handled high speeds. 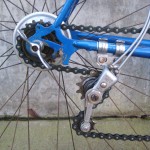 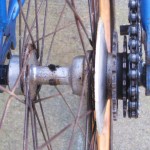 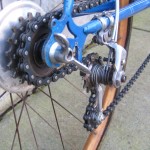 The shifting system is cutting edge technology from 1938. A Cyclo “Oppy” twin wire.
Using two cables, the top-tube mounted lever would pull the derailleur, which dragged the chain sideways across the multiple freewheel cogs that were fitted to the rear wheel. The Oppy, which was named after Hubert Opperman, was an improvement over the popular Cyclo standard derailleur of a few years earlier. The Oppy replaced the standard’s long chain tension spring with a coiled spring around the derailleur piston. It looks like we have a 3-speed freewheel mounted on the Malvern, so with a 15 to 17 tooth spread you would have had it easy compared to your single-speed riding partners…