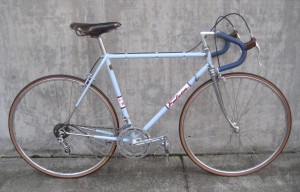 An English Falcon. This one with light blue feathers.

Falcon is an old bicycle and motorcycle brand that had their peak in popularity among cycling enthusiasts in the 50’s, 60’s and 70’s.

Originally founded in 1880 as Coventry Eagle (based in the West Midlands city of Coventry), this brand has manufactured fine bicycles and motorcycles for decades. Production of motorcycles continued until the start of the World War II in 1939. 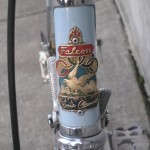 Coolest bike badge out there 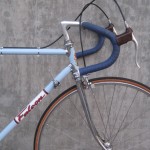 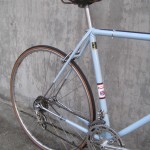 After the war the motorcycle manufacturing ceased with the company concentrating solely on racing bicycles.
In the 1930s the company had a range of sporting bikes under the “Falcon” label, and it was under this marque that the company relaunched itself, losing the Eagle monicker altogether. 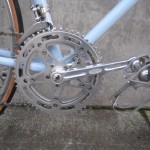 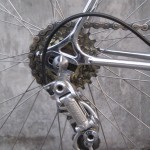 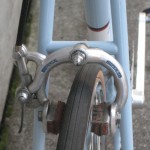 Falcons are so much cooler birds than eagles anyway… An eagle’s primary weapon is his feet. A falcon uses his head (beak actually). How about Falcon bicycles and maybe eyewear company… The Coventry Eagles is a better name for a football club.

Anyhow, the bike is awesome. Like most racing bikes from this era, our pale blue Falcon is built out of Reynolds 531 lightweight steel. There’s a fantastic headbadge with Olympic Rings (Falcon was managed from the ‘50’s through the ‘70’s by British Olympian Ernie Clements), the Olympic torch, a Falcon, and some fluffy clouds. The equipment choices include a bunch of Campagnolo Nuovo Record parts, a Brooks saddle along with Cinelli bars & handlebar stem. As is typical for British bikes from the ‘60’s, this one isn’t all Campag parts, however. There’s a Stronglight crankset (featuring 41 and 51 teeth chainrings) and the Falcon comes to a screeching halt thanks to Universal 68 brake calipers.