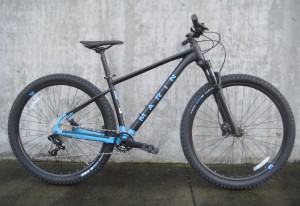 The Marin Team is a race bike that’s plenty capable and tough enough to pilot on really technical trails. It’s light (but not too light), it has fast-rolling tires (that still have decent bite in slimy mud) a great fork and a precise Sram NX 1 x 11 drivetrain.

Marin built this bike with the high-school mountain bike league in mind. Kids that grow out of their starter mountain bikes are going to want something fun and fast, and while a $2500 carbon fiber hardtail would be nice, it can be a bit much for the budget (especially if the rider is still growing). This bike has a msrp of only $1350.