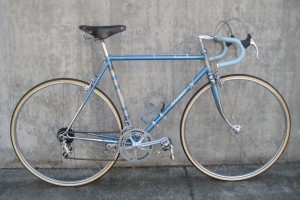 First of all, the actual model designation for this bike is the Raleigh Professional MK.IV Model DL180 (in Blue Mink & Silver). It’s a bit of a mouthful for a model name, so let’s just call it a Raleigh Pro.

Our friend Harry Downing bought this lovely machine at a bike shop in Iowa in the 1970’s. Thanks to the Dutch TI-Raleigh racing team, Raleigh bicycles had at the time a racing pedigree that could rival the storied Italian and French labels. A Raleigh Pro like this one might be placed front and center in a bike shop window and it could garner as much attention as those other makes.
Since Raleigh (like Schwinn) manufactured a full line of bicycles for the family, there were lots of bike stores in the United States who carried the brand. Cycling enthusiasts like Harry didn’t have to go on a state-wide search for a Legnano or a Masi, they could simply visit the local bike shop as a lot of these dealers actually stocked the top-end racing models. 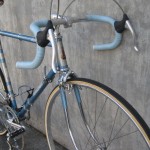 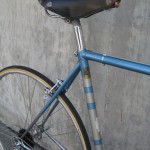 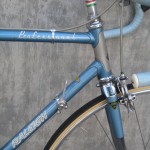 The Professional had all of the bells and whistles. The frame, made out of butted Reynolds 531 steel tubing, featured Campagnolo dropouts, spearpoint lugs with a Brampton-Victor “Fastback” seat lug and a bottom bracket shell with a weight-saving and decorative bit of material cut out of it. The fork was made with an elegant sloping crown and was similar to something you might find on a Cinelli… And there was chrome. Lots of shiny chrome. 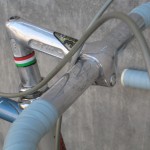 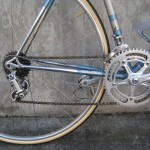 Now, finding a good racing bike equipped Campagnolo Nuovo Record components was hard enough in middle America circa 1974. Just imagine how cool it would be to discover the extra lengths Raleigh went to while outfitting the pro. A Nuovo Record gruppo that included the seatpost, headset, and the svelte side pull brake calipers (and not just the drivetrain). Super Champion tubular rims and silk sew-up tires. A Maillard six-speed freewheel. A Regina Oro chain. A Silca frame pump. A 3TTT Record handlebar stem with an Italian flag decal on it. GB Maes handlebars with an outline of England engraved upon it! 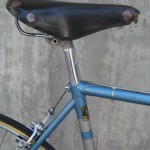 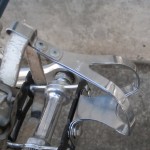 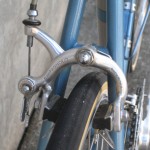 You know, we aren’t even finished with all of the details. This bike came stock with the matching handlebar tape and brake cable housing. The Campagnolo pedals were outfitted with Christophe toe clips (although we’ve changed them on this bike to show off the special Ale double-ply clips). The saddle, a Brooks Professional model, has the big brass rivets (it’s not the less expensive model with steel rivets). The wheels feature high-flange Campy hubs. This bike has even been fitted with a matching blue water bottle cage.

All in all, quite a fine bike.