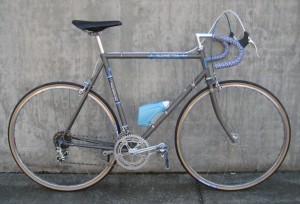 It’s pretty fun to show off first attempts with our little museum (even if that “first” sometimes only means “first commercially viable”).
We have the first hydraulic brakes (disc and rim style), The first derailleur systems, the first electronic shifting (Browning system or Mavic Zap, depending on who you ask), the first production carbon fiber frame (Exxon Graftek), the first aluminum racing bike (Caminargent), even Goodyear’s first tires (on the 1896 CAE).

This bike is another “first”. It’s the first production titanium bike. The Teledyne Titan.

Teledyne, a California company, made about 2000 of these bikes in the mid 1970’s. At a time when nearly every racing bike on the road was made out of steel, Teledyne was a company trying to shake things up. If the only choices available at the time were “Reynolds steel or Columbus steel” or “Blue racing bike or orange racing bike”, Teledyne offered an interesting and tantalizing third choice. 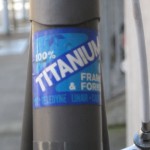 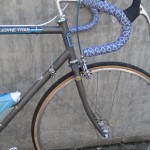 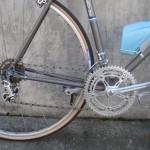 By picking the grey titanium option you got a strangely smooth and comfortable bike that averaged about 2 pounds lighter than those steel options.

“Strangely smooth” because the pure titanium tubing made these bikes really flexible. For some riders (particularly tall or heavy ones) a Teledyne was unnerving. Rumors about frame cracks and collapse persist even today. The “I know a guy who had one” anecdote usually falls apart faster than a frame on a rutted road when the narrator is pressed for details, however. 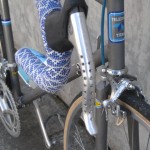 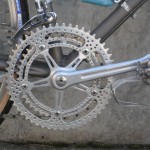 Holes in the chainrings and crank arms 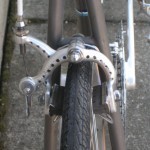 Holes in the brakes

So using the pure titanium tubes was probably not the best idea (modern titanium tubing is alloyed with other metals). The frame and fork flexed more than most bikes, and fatigue cracks were potential problems that may have shown up on heavily used Titans. But if you’re going to take a sport or industry in a new direction, you have to start somewhere.

New directions for the bike world included composite and aluminum tubing as well as better titanium bikes. Aluminum had been used here and there for decades, but a willingness to gamble on the new and unproven by Teledyne probably helped visionaries like Charlie Cunningham and Gary Klein take risks with aluminum bicycle design. Certainly Exxon’s Graftek carbon bike of the late ‘70’s would never have seen the light of day had Teledyne not made their effort first. 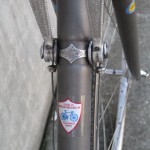 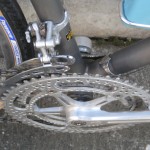 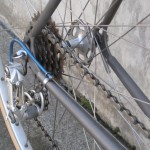 So, what do you think of it? It’s grey and smooth, so not super engaging although the indents where the shifters and cable guides were fitted are pretty neat.
How about the parts? The drilled-out component fad of the 1970’s makes this thing look pretty fantastic. Campagnolo Nuovo Record stuff looks lovely on its own, and drilling dozens of holes into the brake calipers, levers and chainrings only adds to their appearance. The Cinelli Unicanitor plastic saddle furthers the high-tech style for this innovative mid ‘70’s bike. 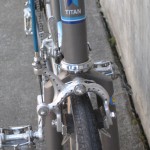 That’s no way to treat a brake caliper 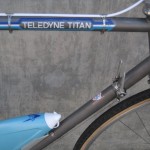 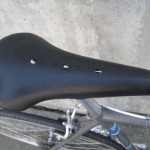 We don’t know who originally owned this bike. Erich Weiter from Bikes for Kids in Tacoma donated it to our museum collection after finding it in the metal recycling at the dump (check out www.bikesforkids.us if you get the chance).  What we do know is that we liked the original owners’ style. A super high-tech bike with the latest parts. A comfortable racing bike with good climbing gears (there’s a 28 tooth cog for hills on that freewheel) and fat tires (28mm wide Michelins from the early ‘80’s were on it when we got it). There are super long 177.5mm cranks installed on it for a rider who was probably only 5’8” tall. The rider, like the bike itself, was ahead of his time.