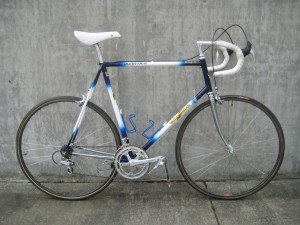 Retro versus modern, “old school” as opposed to being on the cutting edge, early versus later.

These descriptions make it necessary to assign a turning point in time where earlier iterations get the former designations and later versions get the latter. For a lot of road bike elements, the years 1985 through 1987 mark significant changes. 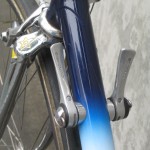 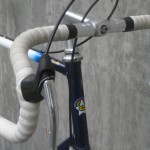 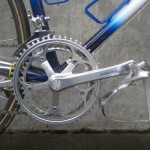 A gentleman named Robert Johnson raced this bike at the Ironman Hawaii in 1986. His bike here has a Columbus steel-tubing frame, sew-up tires glued to tubular rims, “retro” toe-clipped pedals and brake cables that sprout exposed to the wind from the top of the brake levers. Modern elements include indexed shifters (affixed to the downtube as handlebar-mounted shifting was still a couple of years away), a pretty modern airbrushed paint job courtesy of Ten Speed Drive Imports, and Japanese Dura-Ace components affixed to a top-end Italian bike, which was a pretty modern choice in 1985. 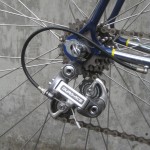 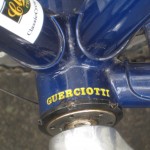 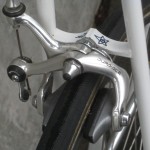 Steel-framed bikes constituted the overwhelming majority of racing equipment at the earliest triathlons, but by the end of the ‘80’s nearly every tri-bike had aluminum or composite frame material, aerodynamic handlebars, indexed shifting and ski-binding style clipless pedals. 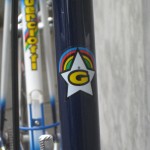 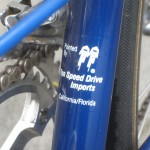 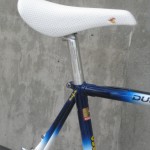 Outfitting a new race bike in 1985 was a little bit simpler than making similar decisions just a year or two later. Which Italian builder do you want to make your bike? Paolo Guerciotti was a solid pick (after you learned how to pronounce his name gware-chee-oh-tee). Campagnolo Super Record equipment, tried and true, or Shimano’s innovative click-shifting Dura-Ace? Innovation it is. Airbrushed multiple colors for paint or traditional single colors? Beautiful choice.