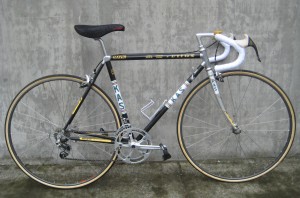 If you were a bike racing fan in the 1980’s, you probably thought that this was the coolest bike you had ever seen. We sure did.

The Vitus “Carbone 9” Kas – Canal 10 racing team bike. The frame was an early carbon (or Carbone, if you’re French) fiber model built very similarly to Vitus’ 979 aluminum bikes. The carbon tubes were glued into aluminum lugs (9 tubes if you count the upper and lower seat stays as separate tubes like Vitus did), resulting in a slightly stiffer and lighter (18 lbs) bike than the standard aluminum version.
The Kas team had a pretty international flavor despite having Spanish title sponsors. The superstar racer on the team was Irish and the bikes were very French. 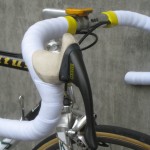 Mavic brakes made by Modolo 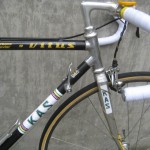 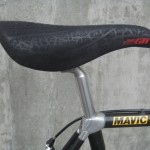 Mavic supplied all of the components, not just the wheels. Despite being from the same Mavic component “group”, the parts had all kinds of different designations. The derailleur is the 850 model. The stem is the 365 and the bars are the 350. The crank is the 630, the cartridge bottom bracket is the 610, and the shifters are 800’s. The model 500 hubs are laced into Mavic GL330 rims. 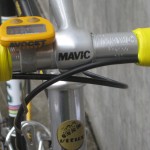 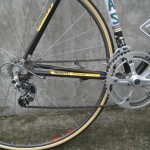 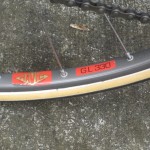 Sharp-eyed bike nerds (you know who you are) will note that the headset on our team replica is a Stronglight model, not the Mavic 310 as used by the team. A funny problem with these old bike projects… We have the headset but cannot find the tools to adjust the Mavic headset once it is installed… So for now, the Stronglight. 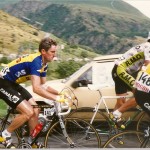 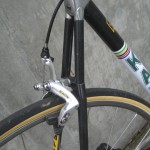 Vitus counts these as 4 tubes in their “9” total 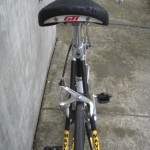 The view from the back

Somebody out there would probably also like to point out that Sean Kelly, the Kas team star, used toe clips not Look ski-binding style pedals (and standard brake levers) in 1988, so our bike is all wrong. While it’s true that Sean stuck to toe clips & straps, by the time the Tour de France rolled around that year, six of his teammates were using Look clipless pedals and most of the riders (other than Sean) were using the model 440 brakes like on our bike.

Also, we hate toe clips and like older bikes in spite of them, not because of them. Nobody wants a 1957 Chevy Corvette simply because it lacks seatbelts, right? 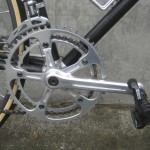 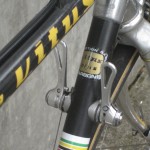 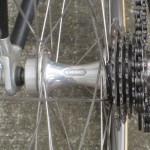 These bikes were a real advantage for the Kas team. During times of rapidly changing materials and design standards, it’s always easier to be on the cutting edge. In 1988 a number of teams were riding steel bikes (from Colnago, Gitane, and Eddy Merckx for example) built with Campagnolo Record “C” parts. These were likely to be 22 pound bikes. A four or five pound difference in overall bike weight for the hills (like aerodynamic advantages during time trials) could mean the difference between success and failure for racers of the era.

Bike trivia bonus: Kas is a Spanish line of soft drinks produced by Pepsi and Canal 10 is a Spanish television network. The bike racing team folded in 1989 after director Jean de Gribaldi died in a car crash.