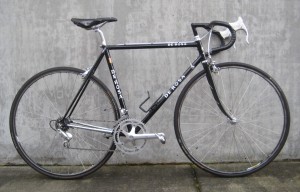 Which came first, the bike racers or the reputation?

When you’re looking at vintage steel racing bikes there seems to be a stratum for the top labels, particularly for the European brands. We have noticed (and probably helped propagate) the idea that Colnago, Merckx, DeRosa and maybe Bianchi’s Reparto Corsa division occupy the top tier for racing bikes. Other brands like Cinelli, Rossin, Masi or Tommassini may naturally slot in as “next best” while labels that have turned out some fantastic bikes over the years like Gitane, Pinarello, Peugeot or Legnano get labeled “third tier”. This stratum is not really fair, but it seems to exist. The question we want answered is whether the hierarchy would exist without the bike racers who rode these bikes. Maybe the reputation came first and the bike racers gravitated towards certain builders as a result? 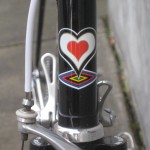 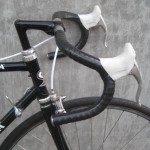 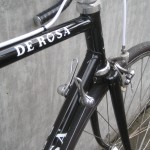 This is a late ‘80’s DeRosa Professional and it belongs to our friend Scott Bellamy. Scott probably doesn’t remember if his decision to buy this bike was informed by Ugo DeRosa supplying the Ariostea team. He may have been aware that the great Gianni Motta raced a DeRosa for a number of years. Perhaps Scott was a fan of Eddy Merckx or Francesco Moser and had to have a DeRosa just like his favorite racers. Maybe Scott’s dad was a bike racing fan and had told him stories about Geminiani’s exploits racing in the 1960’s. 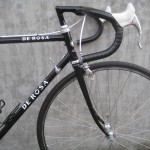 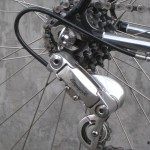 By the late ‘80’s, DeRosa had a mystique surrounding their bikes. The reputation for superb handling, magical climbing abilities and general racing efficiency were ascribed to the brand. This particular DeRosa, outfitted with Campagnolo’s beautiful C Record group would have been described as a magnificent racing bike to Scott before he even had the chance to test ride it himself. 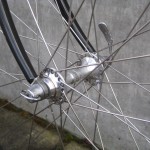 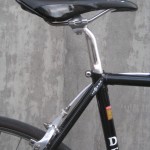 So, what’s the answer? Are the old bike racers the reason that DeRosa is an iconic brand or did Ugo DeRosa make spectacular racing bikes that attracted professional and amateur racers alike?

Scott’s bike here answers that question. Look at the saddle or the tires. They’re modern. The bike is over 30 years old.