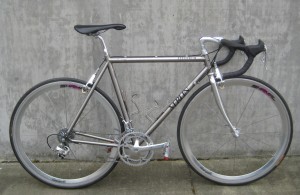 If the mythical wizard Merlin dabbled in alchemy he may have realized that turning lead into titanium was an easier way to end up with gold than doing a straight lead to gold conversion.

In the late ‘80’s, bike brands were trying all kinds of new materials to build the perfect frame. Racing bikes had been built out of steel tubing for decades, so coming up with a rust-proof alternative to steel that was lighter, stiffer, less expensive to build or just looked different was the holy grail in the new material quest.

In 1986 the Merlin bike company pulled titanium out of their magic hat. 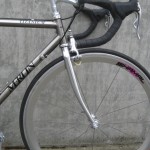 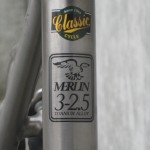 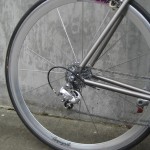 Merlin Metalworks was founded by Gary Helfrich, Gwyn Jones and Mike Augspurger in Cambridge Massachusetts. The folks at Merlin pioneered the use of titanium for mountain bike frames, they figured out how to make titanium frame tubing internally butted, and with design help from Tom Kellogg of Spectrum Cycles they came up with this road bike that you see here. The titanium tubing made for a springy ride (if not actually stiffer than a steel bike) and one that was lighter, rust-proof and markedly different looking.

Cheaper than steel? No. It was definitely not cheaper.

For close to ten years Merlin ruled the world of exotic high-end racing bikes. A Merlin mountain bike or road racing bike was considered indestructible. While carbon fiber durability was viewed with a skeptical eye and aluminum ride quality was often labeled as being too stiff (deservedly or not), the sublime ride of titanium was immediately embraced by those willing to pay the higher prices. 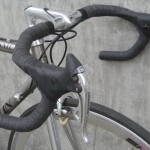 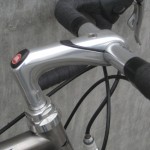 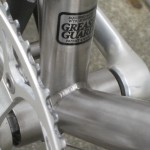 The round tubes, horizontal top tube and pump peg on this frame tie it to all of the steel frames that came before it. The integrated cartridge bearing bottom bracket, aluminum fork and bare titanium led to designs that are still common today. 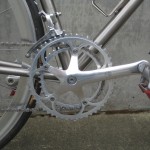 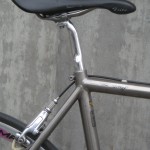 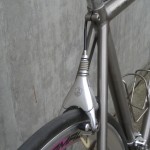 By the way, we gotta say that it makes us wince a little bit to overhear this bike being described in the shop as “retro” or simply “old”. Some things (like the Blackbird SR-71 spy plane or the iPhone) should never get the label “antique”. Maybe for a bike that was cutting edge technology in 1989 those adjectives are accurate. While we would prefer that people use the term “classic”, we’ll begrudgingly admit that Ronald Reagan was probably still in office when Merlin Metalworks got the original order and deposit to build this magical machine.