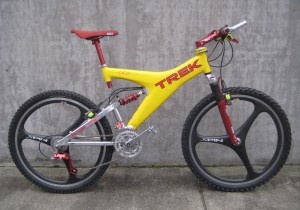 That’s what our friend Chris Lyons thought when he saw this Trek Y-33 at Frank’s Fix-it shop in Aberdeen. Clearly a labor of love for all things awesome in the 1990’s, this bike has been upgraded to perfection.

Let’s start at the beginning. This is a Trek Y-33 built in 1996. It is arguably the coolest thing that Trek, a midwestern company with a reputation for generating some fairly dull bikes, has ever made. When Trek introduced the Y bike it created an immediate buzz. Every bike magazine at the newsstand featured a review. In bike shops around the country there was a lot of gawking and countless test rides.

Trek’s earlier suspension designs (the 9000 series) were terrible. They were heavy bikes that bobbed up and down as you pedaled and bikes that reacted fairly unpredictably to bumps in the trail. The Y bike was a step forward for Trek, and it addressed a lot of those issues. The Y-33 utilized Trek’s OCLV carbon fiber in a radical looking and light weight main frame that was coupled to an aluminum unified rear triangle. No pedal-induced bobbing, predictable behavior and a pretty light bike. 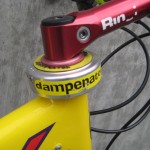 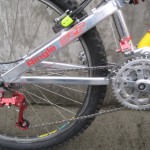 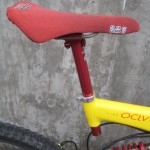 The components here represent great ingenuity and some really fun style.
The stock fork has been replaced by the long travel Rock Shox “Judy DH” downhill model. We’re not sure if the additional 15mm of fork travel was the goal or if it was the red fork legs…

The Spin thermoplastic wheels look just right with this Y bike, don’t they? Tough, reasonably light, and cool looking. The three requirements for most of the parts here. 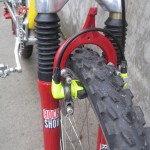 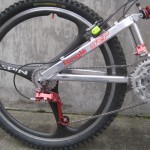 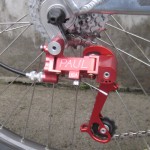 What else? Let’s see… There’s a SDG saddle with a Kevlar cover (no rips in your saddle if you crash your bike). Red Control Tech handlebars to match the Ringle seat post and handlebar stem. White Industries made the polished aluminum crankset. Paul Components of Chico, California made the derailleurs and helped create the small window of time when it was possible to assemble a bike that was 98% American made.

Oh, the Dampenator! That’s a rare thing. The StableTec Dampenator (that donut around the headset) was an attempt to calm down the steering on mountain bikes in the ‘90’s. Currently (and in the early days of mountain biking) frames were made with slack head tube angles to help you steer and stay upright at high speeds or while riding on rough trails. In the ‘90’s you were on your own, wrestling with twitchy bike frames that had steep front ends, narrow handlebars and a forward riding position. Steering dampers would have really helped (if you could get over the added weight and the funny appearance). 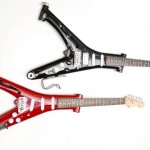 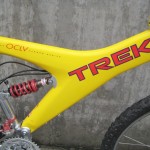 Oh, so what about all of those bike magazine reviews and rider testimonials? Verdicts on the Y-33 varied wildly. If you had fairly smooth, open terrain and/or you stayed in the saddle most of the ride, you were a fan. If you had tricky trails or stood on the pedals a lot, you were left wanting more…