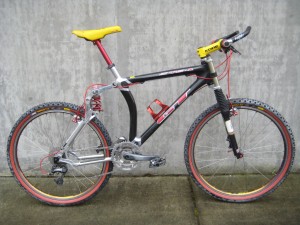 In the old days, bikes were easy.

Bike frames and forks were made out of steel tubing, you had “racing” or “touring” design, and you had maybe a half-dozen component groups to sort through.

This is not an easy bike.

This is an STS DS thermoplastic dual suspension bike from GT Bicycles. It was built in 1998, a time when bikes were made from all kinds of different materials, built for vastly different yet very specific types of riding, and outfitted with bike components that could come from a hundred different sources. 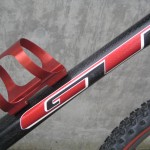 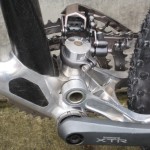 A lot of machining 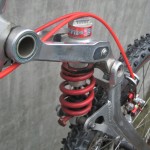 Let’s start by talking about the frame (and handlebar) material. These areas were made out of thermoplastic. Thermoplastic is not the same as carbon fiber. With regular carbon fiber you use glue and pressure and sometimes heat to form it the way you want it, and you can’t really change the structure once it cures. With the kind of thermoplastic used here you can rely on heat more than mold pressure to shape things the way you want them, and if you get it wrong you’re able to heat things up and repeat the process.
Carbon fiber was still looked upon skeptically in 1998 (especially in mountain bikes) so malleable thermoplastic with its hypothetical repairability was an easier frame material to sell. 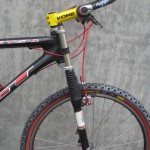 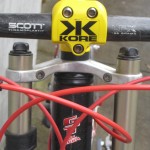 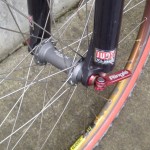 The STS was pretty extreme for a cross country mountain bike in ’98. It had almost 3 inches of suspension travel and a pretty long wheelbase. The dual-crown Rock Shox Judy XL fork was pretty heavy by racing standards and was considered downhill-specific on looks alone. The seat tube was curved on this bike to make room for the rear shock linkage and Rock Shox Coupe Deluxe coil spring.

The cockpit features a long Kore stem and a narrow Scott thermoplastic handlebar. Like every other mountain bike ridden in the 1990′s this one has a pair of Onza bar-ends, grip shifters (X-Ray 800′s) and a colorful Ringle seat post. 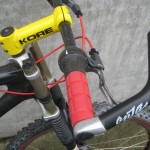 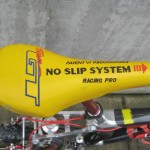 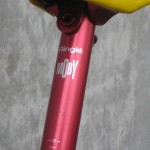 In the ’90′s there were a dozen different American bike component companies that offered cool CNC-machined anodized parts. All purple parts or a rainbow of colors was not uncommon. This bike got a minor red treatment. It has red Paul Components brakes, twist-off (not cam-actuated) Ringle hub skewers, a red Ringle seat post and bottle cage. The red-anodized theme could have gotten out of control with brake levers, hubs and cranks getting in on the craze, but the matte grey Shimano XTR parts put a stop to that. 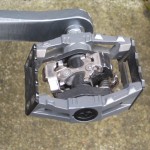 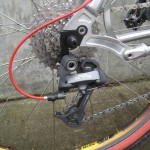 There are a few more notable bike bits to point out. The “Sunset” anodized Mavic 217 rims look great as do the gold and red spoke nipples. The Shimano DX pedals gave mountain bikers a bigger platform than Shimano’s cross country models, offering better support for softer shoes and a place to stand when your cleat wasn’t actually clicked in.
The Shimano XTR 950 drivetrain really was a benchmark for reliability and performance, but some of the parts were crazy expensive. This bike omitted the matching XTR shifters and brakes to an otherwise complete group. XTR trigger shifters worked great but were about three times the cost of the Gripshifters, a difference that usually explained the substitution and not an actual preference for twist-shift actuation. 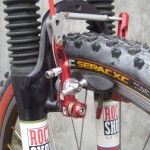 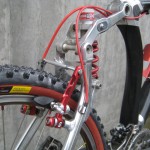 Lastly, the brakes are fantastic. Here we have Paul Component’s linear pull variation called the Crosstop (III). They stop really well but were kind of hard to figure out when we were setting them up. There is an adjustable lever arm running across the top where the cable and V-brake noodle usually resides, and the cable stop and pinch bolt is down the side instead of on top of the brake arms. Just another thing about this bike that wasn’t so easy…