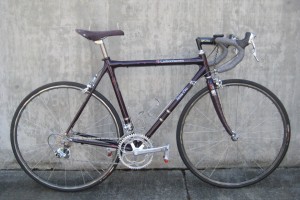 Quick Robin! To the Batbike!

Batman and Robin didn’t have road bikes in their arsenal (as far as I know), so if they wanted to leave the Batmobile in the garage there was really only one proper bicycle source for the dynamic duo. Craig Calfee at CarbonFrames would have been the guy to call.

Check out the details on this old Tetra-Pro. It’s perfect for the bat cave.

CarbonFrames construction techniques didn’t (and probably still don’t) involve just a handful of frame molds or a set of aluminum lugs connected by carbon fiber tubes of various lengths. Instead of being glued into cast aluminum joints the tubing was wrapped at the junctions with carbon fiber cloth, pressed into something that we imagine looks like a big waffle iron, and “baked” to perfection. Besides the ability to customize virtually every aspect of their frames for size, handling characteristics, stiffness and flexibility, their construction methods produced the neat webbings that reinforce each “lug” and lend the Tetra-Pro its cool bat-wing look. 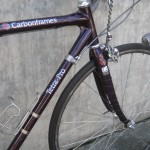 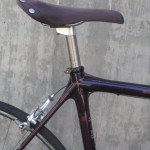 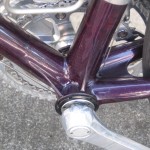 Calfee and CarbonFrames jumped away from the front of the pack in the early ‘90’s. Greg LeMond and his “Z” team sought out Calfee for the 1991 season knowing that they could get stiffer, lighter and more customizable racing bikes from CarbonFrames than from any other manufacturer. 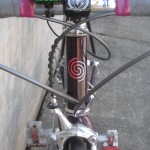 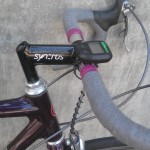 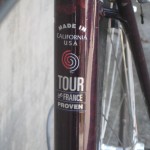 If you compare the most prestigious racing bikes from the early ‘90’s against one another it’s pretty clear that Calfee’s creations were the best available. Great handling and cool finishes (our Tetra-Pro here glows like a purple marble when out in the sun) top off bikes that were lighter, stiffer and yet still more comfortable than ninety-nine percent of the bikes in the pro peloton.