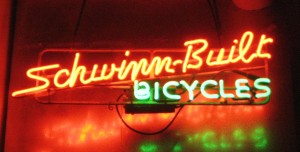 There are a lot of old Schwinn bicycles kicking around Classic Cycle.

In fact, there are enough of them that we decided that they deserve their own museum section.
We owe the Schwinn family a big thanks.  In the three decades immediately following World War II, Schwinn nearly single-handedly kept the United States riding bicycles.  They trained bicycle mechanics and helped build professional bicycle dealerships across the country.  They built bikes for adults at a time when cycling was considered just a childhood activity.  They made industrial-age bicycles seem new and exciting during the space-age.

For many of us, Schwinn bicycles are the reason we even ride a bike today.

So with all of that, keep in mind that Schwinn bicycles of today are not the bikes that we hold in such high esteem.  The Schwinn family is no longer involved.  The bikes are built overseas, not in Chicago.  Professional bicycle stores and trained mechanics are rarely involved in the assembly of new Schwinns.

If you find yourself at a Schwinn “dealership” these days, we suggest that you check out the grills or the lawn furniture instead.