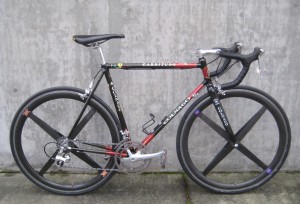 It’s a little hard to see the details from the side, so be sure to click on the photos so that they enlarge.

We probably don’t have to argue the merits of this old Colnago, you can decide if you think it’s cool for yourself. Let’s just say that if you like it now, imagine what you would have thought if you were an aspiring bike racer in the late ‘80’s or early ‘90’s and laid eyes on it then.

Now, is it most awesome bike you’ve ever seen?

How about a little bit of background: In 1988, carbon fiber (we usually called it “Graphite” back then) was set aside for racers doing the mountain stages of the Tour de France. Bikes made out of carbon fiber were expensive (a Vitus Carbon 9 was twice the price of a Vitus aluminum model) and the new material was still a couple of years away from being marketed for mountain bikes, touring bikes, or any other general use. 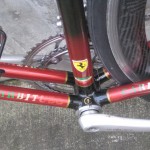 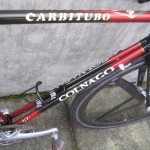 Colnago had been blowing our minds with the shaped-steel Master models (the Equilateral Master was particularly freakish) for a couple of years, their double-downtube Duall aluminum model seemed weird and exotic and the steel Arabesque was extremely ornate. Carbon fiber was utilized in a couple of concept bikes and limited-production superbikes, but when Colnago unveiled the Carbitubo at the bicycle trade shows it stole all of the attention from their other models. 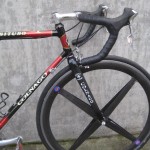 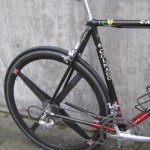 Right away the Carbitubo seemed special. When my friends and I first fawned over it at the 1988 Chicago bicycle trade show we knew it must be the greatest racing bike ever. It was high-tech, had an unusual design, it had built-in racing heritage, and the Ferrari car company helped design it somehow!

As it was explained to us, the two side-by-side downtubes resisted flexing horizontally but would still respond to bumps in the road with some vertical give. The redundant downtube would also protect the rider in the event of a (wildly hypothetical) failure of just one tube while out riding around. The chainstays, nearly square shaped by the bottom bracket, tapered and flowed into pencil-sized round tubes where they joined the aluminum dropouts. 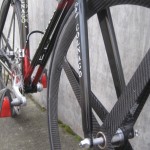 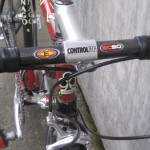 Retro and high-tech all at once?

The tie-in with Ferrari was probably more than just cross marketing. Colnago got help from Ferrari figuring out how to build with the new material, and Ferrari got an inexpensive (imagine how much material goes into car body panels versus a bike frame) and relatively low-risk platform for experimentation.

The Carbitubo models were available from 1989 through 1992. They came with Colnago’s straight-bladed steel Precisa fork and most of the time you would find them built up with the Shimano Dura-Ace 7400 group or Campagnolo C Record parts. The Ariostea and Buckler pro teams raced the Carbitubo to great success, sometimes even with these cutting-edge (literally) Spinergy Rev-X wheels! 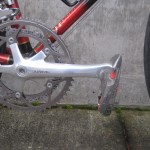 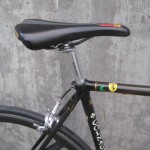 Our museum bike here is based on a frame from 1990 but it has been built up with slightly more modern components. It has Dura-Ace 7700 (circa 1996-2002) parts, a Colnago carbon fork (from their C40 model), Time Titan Pro pedals and a Selle Italia “Ferrari Engineered” Novus model saddle. The build-out of this bike represents a greatest hits package from the 1990’s and it’s not just a museum piece that we’ll be hanging on our walls.

We’re going to enjoy some miles on this bike!