Wearing the stars and stripes of National Champion 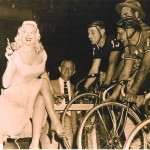 Erwin Pesek was a tough guy from Chicago who happened to love racing his bicycle.  Erv’s passion for racing spanned the decades, from his start in the 1930′s all the way through his last big race in the 1960′s.  Six-day track events were Erv’s forte, partnering with many greats of the sport over the years.  Fellow racers (including his brother, Fred) admired and enjoyed racing with Erv, as he threw everything he had into each race, always cranking out the miles with a smile on his face.

A friend and fellow Chicago area racer Bill Jacoby noted that whenever Erv crashed, he was quick to get back up, and fast getting back into the action.  In Erv’s last Six Day race at Madison Square Garden in 1961, he crashed heavily, breaking his nose, and suffering gashes and bruises.  After getting patched up at the local hospital, Erv returned to the Garden to relieve his partner and finish the race, and he received a standing ovation for his efforts. 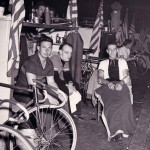 Looking a bit beat up, during a break in the action 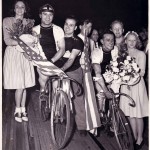 Raboldi and Pesek at the 1947 Chicago Six Day

During World War II, Erv was a paratrooper in the 101st Airborne division, and he parachuted in behind enemy lines during the D-Day invasion, and saw heavy combat for the following year.  The funny thing is, most of the scars and aches and pains that Erv suffered from in his later years were from bike racing, not war wounds.

When track racing dried up in this country in the early ’60′s, Erv began a second career with Schwinn in Chicago, where he worked as a sales manager and warehouse manager until his retirement in 1982.

You can see some great racing footage and a fun interview of Erv in Jeff’s documentary The Six Day Bicycle Races.