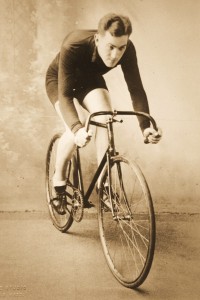 One of the most successful bike racers of the late 1920′s and early 1930′s, Czechoslovakian born Frank Bartell won numerous six-day race, but is most known for setting the land speed record in 1935…

…Along a blocked-off boulevard on the outskirts of Los Angeles raced two motorcycle policemen, followed by Tom Mix’s Auburn speedster with a streamlined windscreen fastened to the rear. Close behind was a man on a bicycle, his tremendous legs pumping like pistons. Racing along in the vacuum of the supercharged Auburn’s wake, the cyclist eventually hit 100 miles per hour before slowing down.  The motorcycle officers dropped out at 85.

An official certified that Frank Bartell, professional track racer, had just set the human-powered land speed record, covering a mile at an average of 80.5 miles per hour. 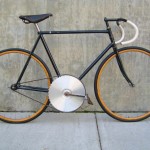 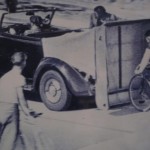 A staged re-enactment for news reels and magazines

Pleased at beating the world’s record of 76 mph. set by Canada’s William (“Torchy”) Peden,  Bartell swore he would average 100 the next time…