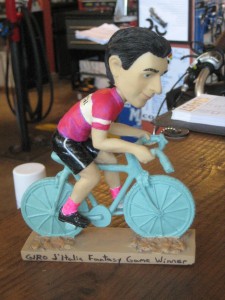 This fabulous trophy goes to…

Those of you who are regulars know that we run fantasy league games that revolve around the Giro d’Italia, the Tour de France and the Vuelta España.

The Giro is going on right now, we’re 10 stages into the race, and here’s the standings for our fantasy teams:

Glenn is looking tough to beat, but the mountain stages to come could change everything. Gavin managed to jump up in the standings thanks to some of his support riders, and Kiel should have his fingers crossed that Pascal Ackermann stops having such a great race (he’s on Glenn’s team).

For those of you with side bets, Jay’s team has a 70 point lead over Tanya, Mulier Senior is beating Mulier Junior, and Ferris the cat is a far superior team director to Jaime.