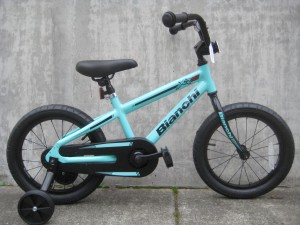 The concept of 130 years, much less the concept of a 130 year-old bike company, is probably lost on preschoolers.

Bianchi’s signature celeste color, by legend the color of queen Margherita’s eyes, is just a blue-green without a corresponding crayon to most kids.

Your child will probably just think that their bike is the best simply because it’s theirs.