We like to work efficiently, and this usually means that we can get your bike repaired and back to you before you even miss your morning commute or your Sunday riding group.

We’ll fix your bike correctly, and we’ll do it right the first time.

Our mechanics are extremely experienced (as you can imagine, having worked on a century’s worth of museum bikes). There isn’t a two-wheeled contraption that we haven’t seen, and we’ve only been confounded by weird technology a couple of times.

If it rolls, we can fix it. 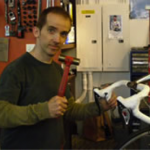 Old picture. He doesn’t have this much hair now.

Paul started with Erik’s Bike Shop in 1985, followed by County Cycles in Minnesota nine years later.  In the past 35 years thousands of bikes have been repaired in Paul’s workstand.  Check out this resume:

4 years with the U.S. Cycling team as road and track mechanic, with multiple European road campaigns, he worked for the national team through two Olympic games and at several world championships. 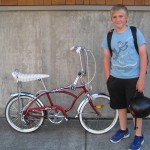 Colin has been a bike mechanic for a lot longer than his age would suggest.

Colin is patient, methodical, and a good problem solver.  Projects restoring old cars, bicycles and motorcycles with his father gave Colin a sharp eye and a steady hand.