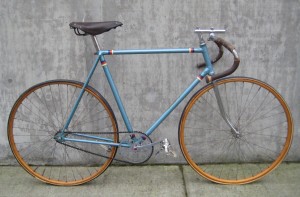 Similar to that earlier bike, this Special was built to withstand the rigors of track racing on banked velodromes, and is a do-everything track bike from a time when endurance and sprint events were raced on the same bicycle.

There is a legacy to consider with the Wastyn Special model name. Emil Wastyn built racing bikes in Chicago for three decades prior to World War II, and he was hired by Schwinn to build the very first Schwinn Paramount in 1937. 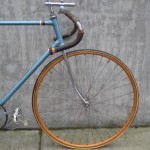 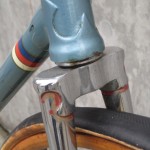 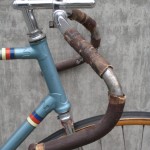 Of course, we’re not talking about Emil here. This bike is an Oscar Wastyn Special, built by Emil’s son sometime in the late 1930’s.

It’s a finely crafted racing machine with the best racing equipment available. The steel cottered crankset is a BSA, there’s an adjustable handlebars stem, a Brooks racing saddle and hand built wheels. Racing wheels like these are extremely light (actually very similar in weight to modern versions with carbon fiber rims). These wheels are so light that they need to be balanced. If you look closely you’ll see little weights wrapped around certain spokes in order to account for the weight of the tire’s valve stem. 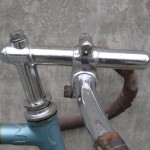 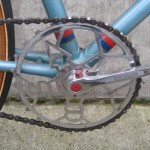 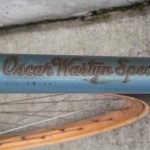 A.F.H.? This bike belonged to Arthur Habener, a Chicago area amateur bike racer. Arthur got almost the exact same spec as the ‘39 Schwinn Paramount in our collection except for the BSA crankset.

It’s no coincidence that this one is similar to the Paramount. Oscar Wastyn took over Schwinn’s high-end construction division after his dad did prototype work, and the spec followed Oscar’s notions of good racing bike design. 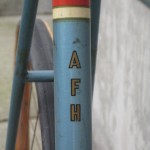 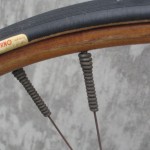 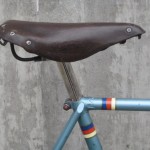 Any other legacies to consider? Funny you should ask. We got this bike from Steve Habener, Arthur Habener’s son who happens to be a cycling enthusiast (and medical doctor) who lives in Silverdale.

Oscar Wastyn jr. and his son Scott are still in the cycling world too, as owners of Wastyn Cycles in Chicago.