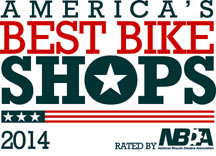 The National Bicycle Dealers Association used to hand out awards each year to bicycle stores, calling out the “Top 100 Dealers”.

Not wanting to sound like they were rewarding casino employees or gang members, they have since changed the name.  The award is now named something a little more self explanatory, and apparently we have just earned the distinction.

Classic Cycle is one of America’s Best Bike Shops.

Paul (and his time with the U.S. Cycling Team) 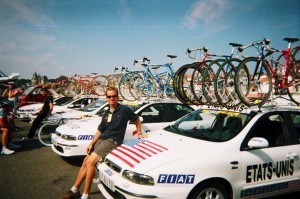 Paul with team car. Notice the Banesto team car behind him.

Back in the 1990’s Paul had a fairly unusual job. He was one of the mechanics for the U.S. National cycling team. The National team, based at the Olympic Training Center in Colorado Springs, is a dynamic organization that re-shuffles several times a year to support track racers, road, cyclocross and mountain bikers (both professionals and up-an-coming amateurs).
In an Olympic year a subset of the National team becomes the Olympic team, and whenever it’s time to compete in a World Championship, riders are plucked out of the National team racer pool to represent the country. 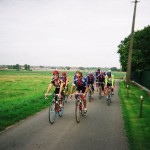 An easy training day with the national team 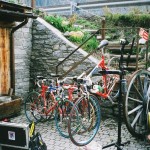 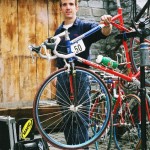 It all started with a phone call out of the blue (with a job offer for his roommate George). That phone call resulted in a travel-intensive career that spanned two Olympic Games, eight or nine World Championships, dozens of races in dozens of different counties, a hundred different bike racers, and about 200,000 frequent flyer miles. 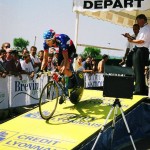 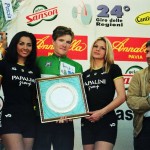 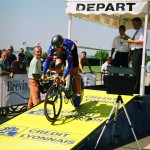 Mostly assigned to work with the endurance track team and the under 23 (years old) men’s road team, the racers that depended on Paul would often progress onto the pro road circuit. 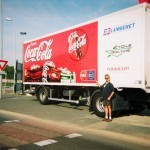 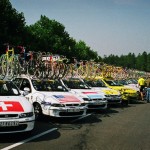 Race caravan at the 1999 Tour d Avenir. This looks like the stage in and around Plouay.

Ever wonder what it’s like to be a mechanic on a bike top-level racing team? Here are a couple of day-in-the-life scenarios:
Travel day: Pack up a couple of vans for a trip to the airport, drive there and then personally shepherd twenty pieces of oversized luggage through the departure and destination airport. Pack up two different vans for a 2-hour drive to a strange hotel where the concierge will direct you (in a language that you don’t speak) to a basement room or back parking lot where you can assemble bikes until 2 in the morning.
Race days: Up at 6am. Wash the team car. Air-up tires and touch-up the bikes (usually 6 of them per mechanic). Have breakfast. Load bikes onto the race car, then drive to the race start. Once the race starts you get to nap in the back seat of the car until you hear your team name over the race radio. Sometimes there are wheels to change or bikes to swap out during a race, but the goal is to be able to nap through the entire stage. After the race you get to drive to a new hotel, wash the bikes, replace broken parts and set up a secure place for the equipment to stay overnight. Dinner with the team, drinks with the coach and the soigneurs, and bed by midnight. 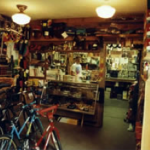 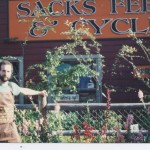 Sack's Feed and Cycle in Kingston

Classic cycle started as Sack’s Feed and Cycle back in 1985.  Possibly the only Trek bicycle dealer in the universe where you could also buy hay, oats, garden tools and live chickens.

Classic Cycle celebrated its 25th year in 2010.  Jeff celebrated by selling the store to Paul and Jaime. 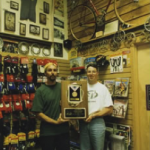 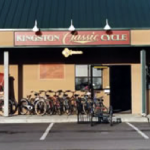 In the early ‘90s Jeff moved the bike operation across the street from Sak’s Feed, and it became Kingston Classic Cycle.  The shop developed quite a following with the antiques on the walls and true bicycle experts behind the work stand. 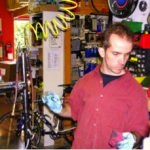 Paul in the workshop 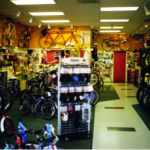 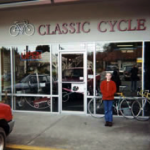 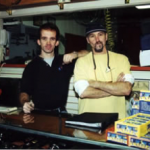 The day before the earthquake

In 2001 Paul joined Jeff in the move to Bainbridge Island.  It was a two-man operation for years, with occasional help from our friends Justin, David, and Donnie.  We opened the week of the Nisqually earthquake, and stayed in our spot between Radioshack and Books, Bagels, & Beans for five years. 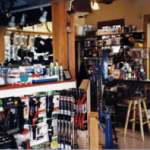 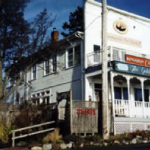 From 2003 to 2006 we welcomed visitors to the Kitsap Penninsula with our shop overlooking the Edmonds to Kingston ferry boat.

Our customers have long understood that we were worth the extra travel time, with regulars coming from as far away as Port Angeles, Tacoma, and Bellevue. 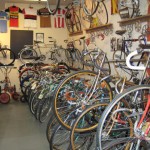 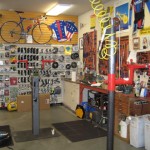 Everyone liked to hang out in the workshop 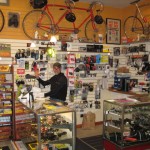 It was a bit dark in that shop. Jeff wore several pair of glasses.

We outgrew our small high school road operation in 2007, so we moved onto Winslow Way and added Kevin, Gavin, and Zach.  All of the extra square feet meant more bikes, more museum bikes, and quite a bit more fun. 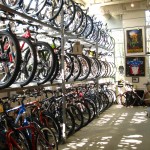 Light, and room to breathe 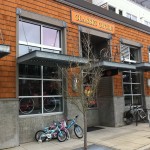 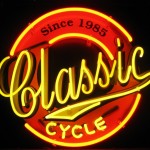 Our current version of Classic Cycle at 740 Winslow Way is the version we plan to keep for the long run.  Since the beginning we have moved a few times, added bike lines and employees, but much has remained the same (we don’t have live chickens anymore, though). 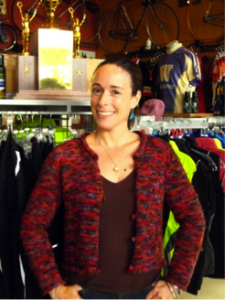 Jaime is a member of the small-business mafia.  She was raised by business owners (Pat and Rich of Sugee’s Bakery in Bellevue), and has been a veteran of a half-dozen other operations. Her resumé includes Churchmouse Yarns and Tea here on the island, The Birkenstock store in Seattle, and bakeries in Bellevue, Bellingham, and Colorado.  She tried corporate life at Microsoft and the non-profit world at Islandwood, but just like the mafia, she could never “go legit.”  By the way, check out her start, and get a great lunch at:

In the cycling world, Jaime walks the walk.  She can be seen riding her bike to work with Paul every day, and if you run into her at the grocery store, chances are that she is pedaling her purchases home.

Paul started working with bikes at the neighborhood bike shop (that neighborhood being Richfield, Minnesota) In 1985 at the tender age of 14.  His enthusiasm for these wonderful machines has not waned in the intervening years.
There were stints working for Mavic and then Shimano neutral race support as well as a few years with the U.S. Cycling Team, but constant travel got old.
Neighborhood bike shops are the best places to be, so upon moving to Bainbridge Island in 2000 Paul went to work for Elliot Bay bicycles and helped bring Classic Cycle back to Bainbridge from Kingston in 2001.  Fate and an inevitable path led to the purchase of Classic Cycle in July of 2010 when Jaime and Paul finally bought the store. 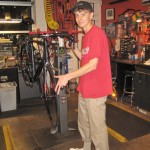 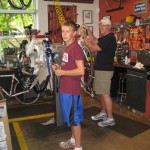 Anders, our punk-kid-bike-mechanic, is growing so fast you can actually hear his bones stretch.  When I assigned him the task of writing his own bio, he was 5’6″ tall.  Now a year later (teenagers!) he’s actually 6’11″.

Anders rides cyclocross and on the road, but is most comfortable in the workshop.  A natural with a wrench, Anders did his first overhaul on a rotary auction bike five years ago, and is still pulling bikes apart any time he gets a chance. 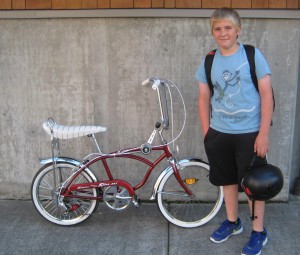 Colin doesn’t like us using this photo, but he’s a good sport about it.

Colin is our extremely competent weekend and summer help. At 20 he already has about a decade of experience tearing apart and rebuilding mechanical things. The photo we have here is from the restoration project on his vintage Schwinn, completed in 2012.

Colin has extensive experience riding off-road, on-road, and on the water (as part of the Bainbridge rowing team).

Home : Shop : About Us
Bike Fitting | Used Bikes | Repair Classes | Ferry Credit | On Sale | About Us | Museum | Contact Us