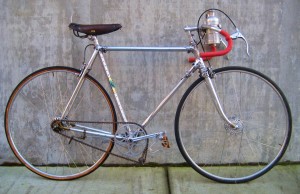 This stunning aluminum racing bike was built by Caminade of Paris at a time before aluminum TIG welding had been developed.  Instead of welded joints like we know today, Caminade used socketed joints and glued and pegged each tube into place.  Over seventy years have passed by, and this bike is still rideable (although a bit creaky).  The tubing is heptagon shaped, and in places it is drilled out to save weight!  A high-tech wonder from the thirties that weighs less than most modern bikes at just 15 pounds. 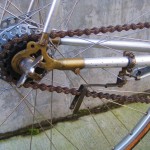 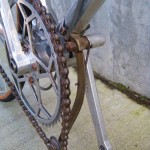 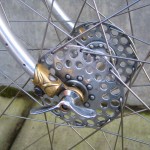 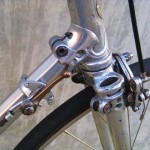 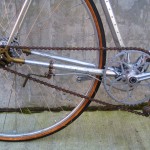 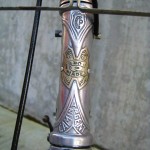 The three-speed shifter on the bike is an “Osgear”, fully known as the Constrictor Osgear Super Champion.  The name ‘Osgear’ was a take on the name Oscar Egg, the designer (and a famous Swiss-French cyclist from the era).  The Osgear was light yet sturdy, and fairly simple to operate.  Fitted to the chainstay is a cable operated guide arm that moves the chain right or left across the three sprockets.  The tensioning arm near the crankset takes up the slack of the chain, and has a  guide-loop of metal on the pulley to keep the chain from coming off. 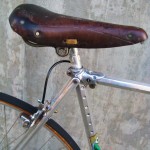 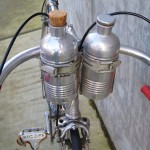 Hey... Check out these jugs

The bike was procured for the museum in the late ’90′s from the bike shop owned by Attilio Pavesi in Buenos Aires.  Attilio was a member of the Italian Olympic team, and the 1932 Olympic road race gold medalist.  Attilio and many of his compatriots emigrated to Argentina at the onset of World War II.  This bike had been raced by one of Attilio’s friends, but he couldn’t remember who.