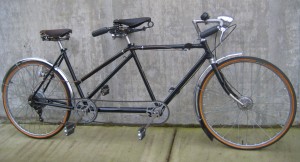 Daisy, Daisy, give me your answer, do,
I’m half crazy all for the love of you.
It won’t be a stylish marriage,
I can’t afford a carriage,
But you’d look sweet on the seat of a bicycle built for two.

Daisy could do a lot worse than marrying a guy with this awesome BSA Tandem.

Most likely purchased in 1936 or ’37, this British tandem built by Birmingham Small Arms is quite deluxe. 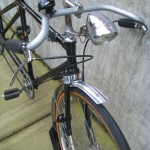 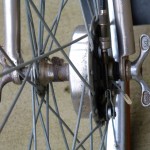 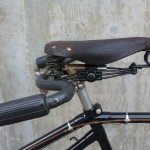 Fabulous features include BSA drum brake hubs, which were built to stop reliably (regardless of the girth of Daisy and her boyfriend).  Springy leather saddles were added to the tandem, an upgrade over the stock saddles that BSA offered, but clearly the right choice for a guy trying to make an impressive bike for his sweetie.  The generator light system on our bike was added more recently, but there is a fork mount designed to carry oil lamps or early battery powered lights.  Full fenders, a bell, Dunlop tires (ours have since rotted away), and cellulose bar wrap made this bike top of the line. 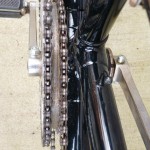 Two chainrings machined from one piece of steel 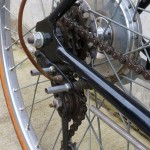 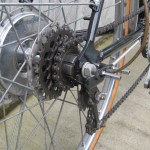 The cogs move sideways, the derailleur stays in place 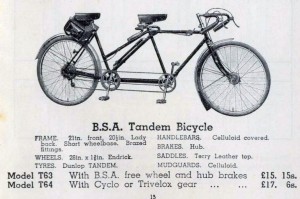 The real marvel of this bicycle built for two is the Trivelox shifting system.  The funky design pulls the cogs side to side under a stationary derailleur.  A good choice for a tandem, where weight is less of an issue, and where the Trivelox’s widely spaced hub bearings supported the axle more evenly.  The Trivelox unfortunately did not withstand the test of time.  If you can imagine holding a pen over a piece of paper, and writing by moving the paper underneath it, you can understand the limitations of this system.  The more gears it was asked to shift between, the wider and heavier the rear wheel had to become.