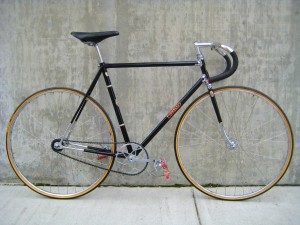 The great Italian champion Fausto Coppi once rode on a Fiorelli.  When Fausto set up the Carpano-Coppi team, he equipped the squad with bikes labeled with his own name, produced by the Fiorelli Brothers (Rinaldo, Mario and Lino).

The brothers’ shop was based in the beautiful Piedmontese town of Novi Ligure, which Fiorelli helped turn into an Italian cycling capitol in the ’30′s and ’40′s.

The Fiorelli name lasted into the 1990′s, when the brand was purchased by Fratelli Masciaghi manufacturers, primarily for the rights to the Coppi name. 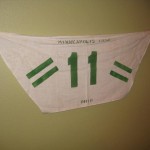 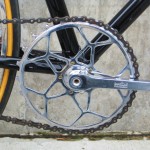 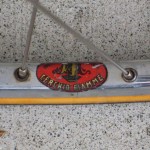 This bike belonged to the son of a Minneapolis dentist.  It was raced hard in the early 1950′s, and was ridden in the Minneapolis Six-Day in 1954. 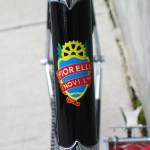 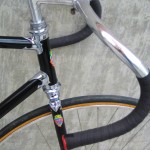 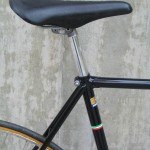 The Cinelli Unicanitor saddle was light (but uncomfortable).

The bike was originally a split-pea green, but was refinished in 2002 by CycleArt in this gloss black.  The bike features Fiamme red label track rims, Magistroni components, a plastic Cinelli Unicanitor saddle, and Ambrosio aluminum handlebars.  Note the pencil-sized seat stays and the nice lugwork around the head tube and fork crown.