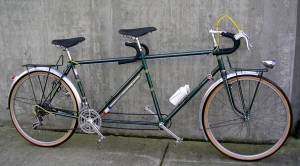 This fabulous tandem once belonged to a friend of Jeff’s named Roy. Roy is now in his middle 80′s but when he and his wife were younger they were avid bicycle tourists. In 1970 Roy decided to have a tandem cycle built by the best bicycle craftsmen of the day, the Taylors in England.
Roy and his wife went for the completely “Taylored” experience with their bike, traveling to Jack Taylor bicycles in Durham County to be fitted for their bike, and they made a cycling vacation of their stay.
That was the start of a good 30 years of adventurous road tours. The tandem was retired and/or began a new adventure with us in the early 90′s. 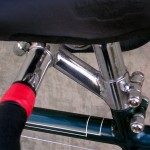 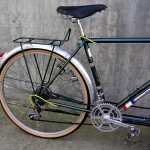 Our friends Jeff and Bob Freeman (of Elliot Bay Bicycles) usually do a vintage bike display at the Seattle Bicycle Expo. A few years back Bob had the idea to bring Ken Taylor from England to be a featured guest at the show. Ken, a youthful octogenarian and great storyteller, stole the show. During the Expo Jeff realized there might be a connection, that Roy had gone to the Taylor workshop in England to have the tandem custom outfitted and that he and his wife probably met with Ken. Jeff thought it would be fun to arrange for Ken to visit Roy and his wife and let Ken see the old bike he helped create. Apparently, it was like the intervening forty years hadn’t happened. The three old timers were like kids again, talking about bikes, touring, and the 1970′s. 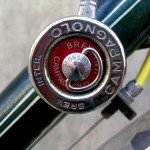 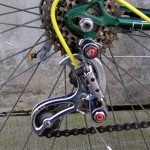 The bike remains as ridden. only the handlebars have been re wrapped. The wheels are the now-fashionable 650b size and the fenders are in perfect condition, Forty-five year old Lefols (that they are un-dented is a miracle in itself). The bike still rides great even with overstuffed touring bags. That Campagnolo Gran Turismo equipment? Well, the jury is still out on that stuff.