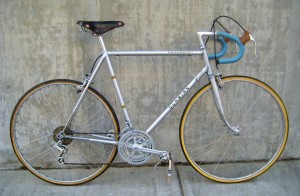 In the summer of ’76, you decided to do some light touring (In those days it would have been “cash touring”, not “credit card touring”) down the coast.  Maybe you wanted to cruise from Seattle to Portland, or attempt a ride around Mount St. Helens (before it blew up).  Whatever your plan, as an avid cyclist (but not a racer) this would have been your ideal bike. 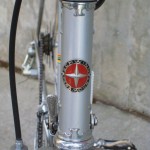 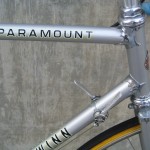 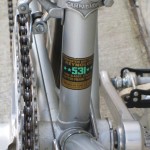 We’ll start with the frame, which was built in Chicago of Reynolds 531 steel utilizing Nervex lugs.  It made for a very light and elegant bike as well as a smooth ride.  This Paramount isn’t a full touring bike, but it isn’t really a racer either, it’s somewhere in between. 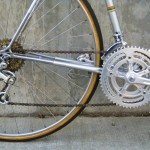 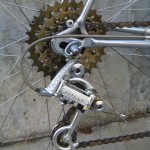 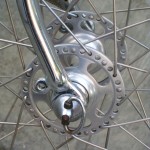 Not being a racer, you would have wanted some reasonable gears for the hills.  This bike has a Campagnolo Rally drivetrain with a triple crankset, really the only high performance low-gear option at the time.

For wheels we have light and sturdy clincher rims and tires which were more practical than touring with sew-up tires, and drilled out Campy high-flange hubs.  The hubs, apparently, were drilled wrong initially, so they just re-drilled in between the mistaken holes and presto! Ultralight hubs.  Slick.  Long-reach Weinmann brakes these speedy wheels to a stop.

All in all, this Paramount was kind of like a modern Lynskey Sportive or a Trek Domane “club racer”.  A great American-made road bike that handles long day tours quite well with very little pretense and just a hint of flash.