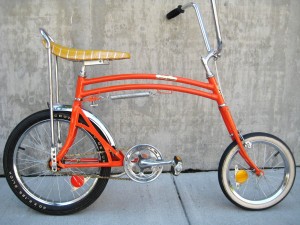 Just like every other fad that was started in the 1970′s, this bike was a fun idea, but lacked a little staying power.

This awesome bike belongs to our friend Drew of Superior, Montana.  Painted a sweet and sparkly orange color and fitted with a striped banana seat, the bike is a visual treat.  Ape hanger handlebars and a tiny front wheel make it a wheelie-popping machine.

Drew’s father bought this Swing Bike from a traveling sales rep swinging through town sometime in the mid 1970s. 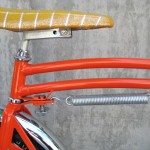 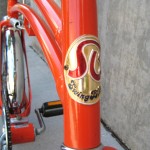 The Swing Bike was invented by Ralph Belden of Cascade Locks, Oregon in the 1960s.

Swing Bikes were advertised during the Donny and Marie Osmond variety show (and even made an appearance on stage).  The popular program turned the Swing Bike into a minor sensation.

We haven’t seen one of these bikes in such good condition before.  Drew has kept his ride in top shape, and it looks like it  just rolled off the showroom floor.  A new Swing Bike like this one would have sold for $119.00 in 1976. 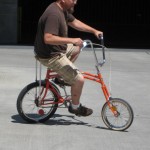 Drew puts on a demonstration 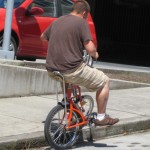 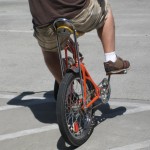 The swing bike’s articulated frame can turn amazingly tight circles, ride partway on a curb, part on the street, and do other amazing stunts.  According to Drew, it is not a good idea to go off a jump without first locking the swing mechanism, however (he learned this lesson the hard way).