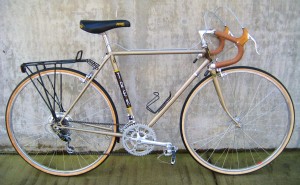 Believe it or not, old Trek touring bikes like this one are still pretty hot.

A good touring bike needs to place your luggage out of the way of your body, the bike needs to be stable under load and in crosswinds, geared to crawl up steep hills, easy to stop on the way down big hills, easy to fix by a non-mechanic, and comfortable to ride for long hours.  The 728′s features hit all of these requirements 30 years ago, and with a few component changes, would still hit them today. 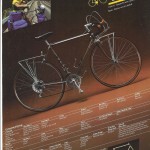 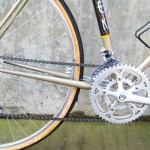 Half-step gearing on the crankset 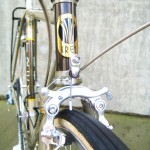 Great stopping power for a loaded up touring rig

While not setting the world on fire with their beautiful graphics (what’s not thrilling about brown and taupe?), Trek’s manufacturing methods, frame tubing, and paint quality was really some of the best to be found in 1982.

While technology and perception of what makes a great racing bike has changed in the past thirty years, the things that make for a great touring bike have largely remained the same.