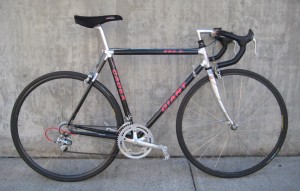 Wow! Fantastic! A Giant carbon road bike from 1989!
1989 was a great year to be a cyclist (or a gear junkie). Ski-binding style pedals and the shoes that work with them had become a regular thing. Indexed shifting, gel saddles, synthetic-fabric cycling clothing and of course those new mountain bikes were all over the place.

In 1989, top-end bicycles were being produced with space-age materials. Titanium was around if you looked hard enough and aluminum was everywhere. Carbon fiber had been available for a couple of years, pioneered by TVT and Vitus of France, Colnago and Kestrel.
The problem was, those bikes were really expensive by 1989 standards. Walk into a bike shop back then and you’d find entry-level bikes at $300 and a Kestrel 4000 or a C Record equipped Colnago fetching around $1800! 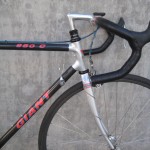 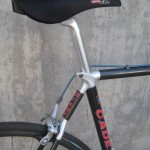 1989 was the year that carbon fiber road bikes became available to the masses. Specialized had the Allez Epic, Trek made the 2100 and Giant made the Cadex. Our friend Fred Williams walked into Mercer Island cycles in 1989 and rolled out with this Giant. He got quite a deal.

For around $1200, Fred got a pretty light and cool looking road bike with a Shimano 105 component group, a Vetta gel saddle, Look pedals and an Avocet 40 bike computer. 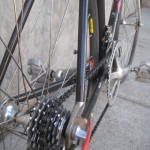 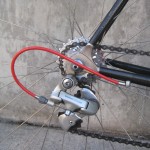 The carbon construction method for these early bikes was pretty straight forward. Cut, mold and cure carbon fabric into round tubes.
Cut the tubing into the correct lengths and glue them in a tube-and-socket fashion into aluminum lugs (that you probably already had ready to go for your all-aluminum bikes). Clean and sand the excess glue, add a clear coat finish (by the way, you don’t want to cover the carbon with colored paint, people have to see the carbon weave) and you’re done! 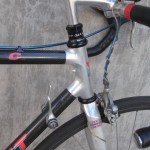 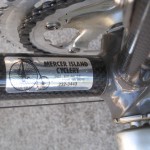 We think that the price range (and the relative scarcity) of early carbon bikes is really what led to three decades of skepticism regarding the material. “Steel is real” and “Do you need carbon?” became article titles in the bicycle magazines not because of some epidemic of failing carbon products but because of jealousy. Call it a need to bolster the damaged egos that resulted when $800 steel Bridgestones got ignored at the club ride the moment a $1500 carbon bike showed up.

One more thing regarding carbon fiber and then we’ll be done. Since some folks love anecdotal evidence to support their beliefs, we’ll give them a new anecdote: This Giant Cadex is over 25 years and 30,000 miles old. It’s still looks and rides great. That steel Bridgestone? The top tube rusted through from sweat after the one winter it was used on the indoor trainer…