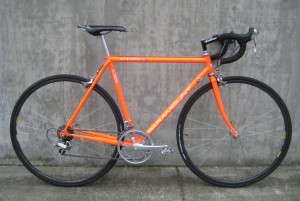 A family name can be a bit of a burden.

With a family name there’s always a legacy involved. Maybe grandpa Jack was a great guy and everyone loved him but Jack junior was always feuding with his neighbors and was known to have a bit of a temper. When Jack the third came around everybody started calling him Jay.

Can you imagine being a 1991 Schwinn Paramount? Dad was a orange bike from ‘74 built with a Campagnolo Record group. Riders were always saying nice things about him. 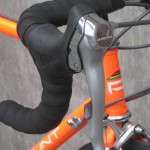 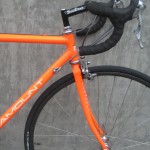 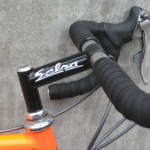 Granddad was a blue Schwinn Paramount hand built by Oscar Wastyn. That bike, built in the ’40′s, had such a great reputation that every Paramount that rolled afterwards was judged against it.

Our ’91 Paramount handles this legacy pretty well. Road bikes like this one were built by the Paramount Design Group (now known as Waterford) in Waterford, Wisconsin. Constructed out of slightly oversized custom steel tubing and painted one of eleven possible colors (can you believe somebody actually selected the blaze orange option?), this bike rides great. 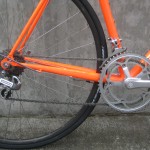 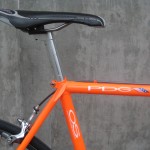 The tubing is silver brazed into custom lugs, and descriptions like “clean” and “elegant” were probably bandied about when this frame was new. The oversized (for 1991) steel tubing produced a lighter, snappier and probably stiffer racing frame than this Paramount’s predecessors. Interesting (to us at least) was that this tubing required the use of a 27.4 mm seatpost, a diameter that nobody else ever used. Thankfully the American Classic seatpost that came with the bike is in great shape. 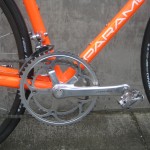 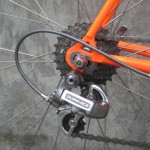 Other component highlights include the Shimano Dura-Ace 7400 parts group, the Mavic Open Pro rims and an original Salsa handlebar stem (by “original” we mean that it’s one that Salsa founder Ross Schafer made himself).

Yep. There’s a lot of baggage that comes with a family heritage. In 1991, if asked who made this Paramount the salesperson probably responded “Schwinn”. In 2019, we answer the same question with the answer “Waterford”.