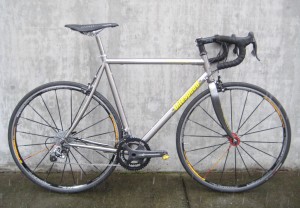 If it were up to us, this bike would be a timeless representative for all of the high-tech metal bikes out there.

People really seem to like dates, however, so we’ll bow to pressure from the bike collector community and call this a 2001 Litespeed Tuscany road bike.

2005 seems more accurate to us. The frame hung on a bike shop display hook for 4 years, unbuilt. In 2005 our friend Michael bought the frame and then made it a working bicycle by installing the 2005 model year Campagnolo Record parts on it, inflating the tires and setting out on it’s first ride.

Like a lot of bikes, this one got some upgrades or just fresh replacement parts over the years. The Mavic Ksyrium wheels were purchased in 2007, the Fizik Arione saddle is from 2013 and the Campy compact crank was from 2017… And the rear innertube is from Wednesday. 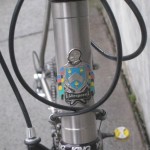 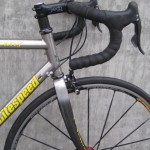 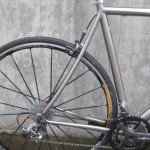 We’re not sure what causes the stickiness surrounding model years in the bike world. A frame or complete bike might come out of the factory in 2001, labeled as a 2002 model. That same bike might sit on the floor at a bike shop until 2004, and be outfitted with parts from 1996 when it finally rolls down the street. Bicycles are not like cars where the ‘55 model had round headlights and a V-8 engine and then the ‘56 version was ruined with square headlights and a V-6.

Although sometimes context makes a difference… Unlike the 1999 model year, a 1997 Trek has no Lance Armstrong baggage.

A Litespeed titanium bike from the ‘80’s or ‘90’s was a bike connected to the Lynskey family who had created the brand and had been building titanium goodies since the beginning. A 2000 model year Litespeed was made after the Lynskeys sold the company. 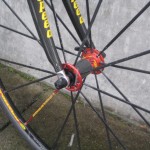 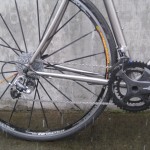 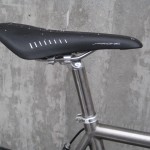 Elsewhere in this museum section we have a Litespeed Solano which we use to tell part of the 1990’s titanium story. The Solano was a good bike, but the graphics and design belong more to the “new” Litespeed rather than the Lynskey-owned Litespeed company that put titanium road bikes on the top of very performance cyclist’s wishlist in the 1990’s.

By the way, when you scroll through the pictures of this bike you’ll find white streaks and spots, photographic evidence that sometimes it does in fact snow in Seattle.

This one now belongs to our friend Eben, AKA BikeSnobNYC. Read his blog at https://bikesnobnyc.blogspot.com/search?q=Litespeed+ to find out how he likes it.