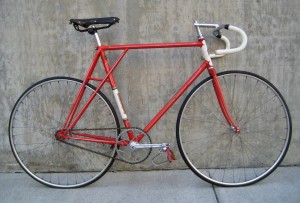 If you can’t get throught this post without making crude jokes maybe you should skip ahead and look at the Schwinn Stingray instead.

Dick Power was a bike shop owner who made and sold some great racing bikes.  His store was located in the Sunnyside neighborhood in Queens, and it was a center for the New York City and Long Island racing community in the ’40′s, ’50′s, and ’60′s.

This is the most unusual design we have seen come out of Dick Power’s frame shop.  Built for a tall rider with a pretty powerful sprint, extra seat stays made for a rock solid rear “triangle”, and limited any top tube twist. 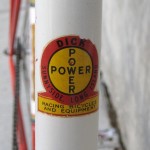 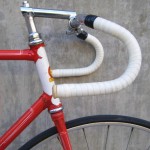 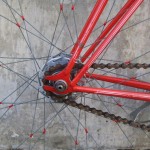 The wheels, built by Dick or another unknown mechanic, have held up beautifully.  They are tied and soldered at the crosses (by a very skilled hand) and each tie point was then painted red to match the frame finish. Tying and soldering spokes used to be a common wheel building procedure.  By bracing the spokes together, the wheels resisted twisting forces better, and spokes broke less frequently. 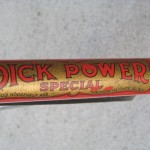 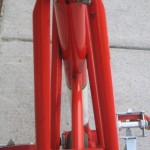 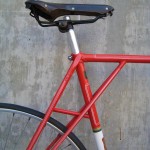 Dick made this bike with the intention that Arnie “The Governor” Uhrlass would ride it.  Arnie was a fierce and pretty successful competitor (hence the nickname).  Dick built this track bike for Arnie to ride at the Olympic trials, but we’re pretty sure Arnie rode something different for his event (4000 meter pursuit) at the games. 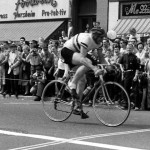 “The Governor” in action

Arnie was a member of both the 1960 winter Olympic team (speed skating), and the 1964 summer Olympic team (track cycling).  As one of a very limited pool of athletes to excel at multiple disciplines, it shouldn’t be surprising to know that Arnie is an inductee in both the U.S. bicycling and skating Halls of Fame.