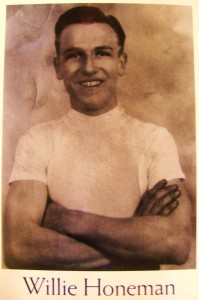 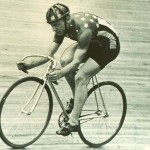 Racing in his stars and stripes jersey, with prototype helmet

Bill broke a lot of ground for other cyclists to follow.  He was the first American to wear a stars-and-stripes jersey as the national champion (before Willie they just draped a flag over the riders shoulders at the podium ceremony).  Willie also lobbied for head protection for his fellow professional riders (ineffective as the available helmets were at the time), and was the first to regularly wear a helmet outside of motorpaced events. 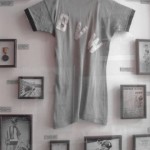 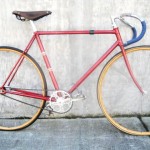 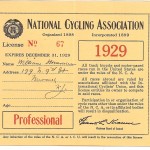 Bill achieved an interesting little bit of immortality in bronze.  Look closely at some of the awards in the shop, as his likeness is found on the top of all of the ABL and NCA racing trophies. 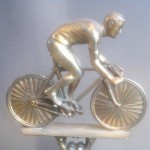 Willy Honeman was the model for trophy tops like this.

Willie was inducted into the Bicycling Hall of Fame in 1994.