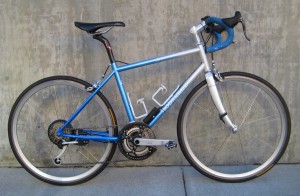 A round of applause for the Browning family and the other Bainbridge Island folks who worked on this ingenious bicycle transmission system.

The Brownings worked on the Smartshift project for around twenty years, and as far as the engineering goes, they succeeded.  It worked well.

The idea behind the Smartshift system was to have derailleurs that could shift automatically based on pedalling cadence, speed and chain torque.  The rider could push a button on the handlebar to shift, or they could just pedal along and let the computer do the work. 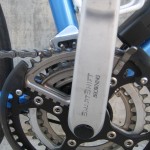 a wedge section moves over, taking the chain with it. 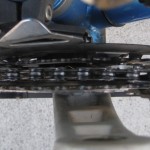 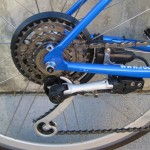 Perfect shifts, but only 4 gears.

Up front, a pie-slice section of the crankset would move over, bringing the chain with it to the neighboring chainring.  Since the chain was continuously engaged, shifting could be done under heavy pedaling force without risk of the chain falling off.  In the back, the forward-mounted derailleur (similar to a Nivex derailleur from the ’30′s) swung back and forth over 4 cogs.

The front shifting system was briefly produced by Suntour in 1991.  Prototypes worked perfectly, but Suntour couldn’t handle the precision needed to effectively mass produce the system.  All through the ’90′s, ingenious Browning prototypes would show up in the cycling world (including on a U.S. Cycling Team track bike that was never allowed to race) until 2001 when the complete Smartshift system was unveiled. 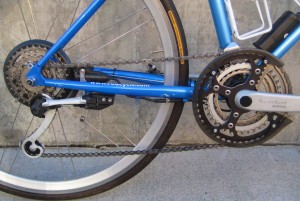 Marketed as the ideal bicycle transmission for “comfort” bikes and for new cyclists who were derailleur-phobic, the Browning Smartshift failed to find a foothold in the marketplace.  While new cyclists would indeed enjoy automatically perfect gear shifts, few were willing to pay the money for all of this technology.

This is Sally Brownings personal bike, a custom Rodriguez (made in Seattle).