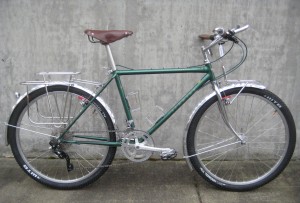 Schwinn was ahead of their time. Way back in 1985 they advertised this bike not as a “Mountain Bike” or an “ATB” (All-Terrain Bike), but as a touring bike. Thirty-five years later the bicycle world is awash with bike-packing-gravel-adventure bikes, so the moment is probably just right to update this machine and sell it as the latest and greatest touring bike! In 1985 Schwinn’s ad copy called their Cimarron model an “Outstanding touring bike outfitted with the world’s finest components.” This bike was out of style for awhile, but it’s outfitted with the finest parts once again. 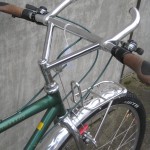 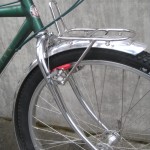 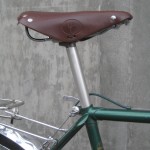 Original equipment dating back to the 1980’s include the Suntour XC Pro seatpost and pedals, the Nitto “Bullmoose” handlebar, Shimano Deore XT front derailleur, crank arms and brakes (updated with modern cables and Kool-Stop pads). The frame features sweet riding butted cromoly steel which was made in America, and the whole package rolls around on vintage Araya rims (re-laced with fresh spokes). 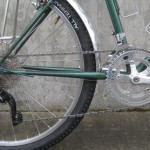 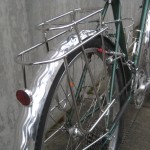 The drivetrain has been modernized to a new Deore XT 2 x 10 system (that we can make a 3 x 10 if you prefer). You get retro-styled (but modern) 10-speed thumbshifters, a modern chain, a cartridge bottom bracket, 12-36 cassette along with new Velo Orange “Drillium” chainrings.

The Aluminum fenders and slick luggage racks are made by Velo Orange, the tires are new ones from WTB, and the new leather touring saddle will be customized to you once you break it in.

This bike will work best for someone between 5’5” and 5’8” tall, and can be all yours for $1199. If nobody out there grabs this old Schwinn I’m taking it home myself… 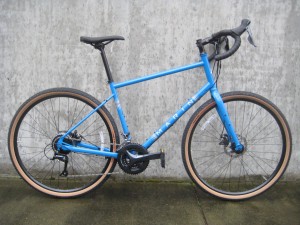 “Four Corners” as in the middle of the American west where Colorado, New Mexico, Arizona and Nevada come together. Buy this bike and plan a tour there yourself. It’s a versatile touring bike, and I’d bet a tour of that length would be enjoyable whether you rode along the paved shoulders of secondary highways, along the Great Divide trail or rumbling down gravel roads.

This is a great bike for century rides on the pavement, gran Fondos and gravel rides, long commutes, and just regular road or off-road rides with your friends.

If you can get over your whole “I might need a bike for a triathlon someday” delusion, this is the bike for you. Fenders, bags and cromoly tubing may not be very aerodynamic, but they sure make your bike ride a pleasant experience.

This bike has loaded-touring frame geometry with a slightly longer wheelbase and slack front end geometry, meaning that it’s a gravel bike with touring geometry that has been tweaked just a bit. The bike is comfortable for really long rides, and it will carry all of your gear without being too squirrely. The tires are 700c x 42mm wide and 650b x 57mm (2.1” mountain bike tires) will fit if you’re planning on more rugged use. The frame is made out of cromoly steel, which delivers a springy, compliant ride quality.

The Four Corners has everything you want. It comes with mounts for 5 water bottles as well as racks & fenders, it has a triple crankset (pretty awesome in an era with so many single front chainring bikes), a WTB Volt saddle, Shimano Tiagra components and TRP cable-actuated disc brakes. All for around $1100. 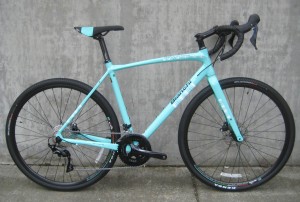 You can call it a gravel bike, but this one is for roadways and trails made of asphalt, gravel, cobblestones, dirt, wooden boards, bricks or cement.

The 40mm wide tires will feel stable and squishy (yet still pretty fast) regardless of the road surface. The wide but shallow drop bars should make you feel comfortable and in control wherever you roll, and the Shimano 105 and GRX component mix should work well enough that you forget about the parts on your bike and just enjoy the ride.

If you want this bike for commuting or long-distance touring, fenders and racks fit just fine (in fact there are hidden holes where the fender struts slide in and secure). 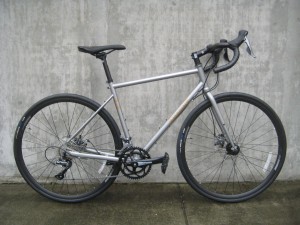 The Marin Nicasio has a steel frame and fork and it may just be your next favorite bike. The Nicasio is outfitted with a Shimano Claris drivetrain, Promax mechanical disc brakes, durable 32-spoke wheels and 30mm puncture resistant (but still nice riding) tires. It has a familiar smooth ride that reminds us of road bikes from the 1980′s. Actually, the price reminds us of the ’80′s too. It’s under $800. 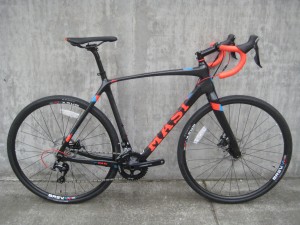 If you’re only going to have one bike to do it all, this Masi is a great choice.

A great commuter bike for riders in the Pacific Northwest, the carbon frame won’t rust.  There is no paint to chip off (it’s bare carbon with a few decals impregnated into the carbon).  The disc brakes work great in the rain, and with no brake wear on your rims your wheels will last a lot longer.  The bike will also handle a wide range of tire sizes and still have room for fenders.

Take your commuter fenders off of the Masi and you have a great cyclocross racer with the 33mm knobby tires. Put 42mm wide tires on it and you can ride rutted logging roads and gravel in comfort for hours. Switch out the entire wheelset for a fat 650b setup and you’ll have a drop-bar mountain bike.

This is a comfortable bike with performance and adaptability to spare.

Cyclocross bike or gravel bike or disc-brake road bike?
Masi has a family of bikes that fit into all of these categories but are defined by none of them.
Masi’s CXGR series are just good bikes that do everything pretty well.
The idea behind the CXGR bikes is that you can blur the lines of different road bike categories and make a versatile and fun bike. Take a long haul touring bike and make the handling sportier. Take a cyclocross bike, lower the bottom bracket height for better on-road manners, then add rack & fender eyelets. Take a road bike, install disc brakes and give it some beefy tires and rims so it can handle a tough urban commute.

With the stock 40mm wide 700c tires you get better handling in the gravel and mud than a typical cyclocross set-up, without the bouncy (and somewhat slow) feel from truly obese 650b wheels. 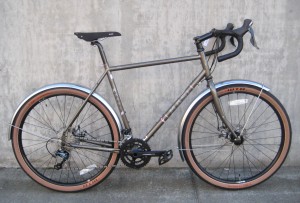 If you can get over your whole “I might need a bike for a triathlon someday” delusion, this is the bike for you. Fenders and cromoly tubing may not be very aerodynamic, but they sure make your bike ride a pleasant experience.

This bike has randoneering frame geometry, meaning that it’s a road bike with touring geometry that has been tweaked just a bit. The bike is comfortable for really long rides, and it will carry all of your gear without becoming too squirrely. The wheels are the 650b size with 47mm wide tires and Masi has still managed to fit fenders on the bike. The frame is made out of cromoly steel, which delivers a springy, compliant ride quality.

The Randonneur has everything you want. It comes with stainless steel fenders, a compact crank (with a 32/48 tooth gear range), classic style, Shimano Tiagra components and TRP cable-actuated disc brakes. 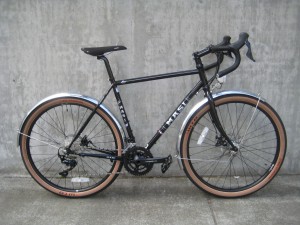 I just said the Randonneur has everything that you want.  If I’m wrong about that, and what you want includes a really bright generator headlight and Shimano 105 components, then check out the Randonneur Elite.

The dynamo light puts out what looks like 1000 lumens, certainly enough light to make you swear off rechargeable lights for good. The Shimano 105 parts pack an extra cog onto the rear hub (compared to the Tiagra 10-speed stuff) and you get an even lower low gear. 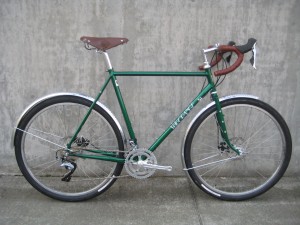 Oh my god, there are so many bicycle buzzwords today. If you’d like a bike that has them all (except “electric”), consider this Velo Orange Polyvalent.

It rides beautifully loaded down with stuff as well as bare bones like you see it in our photo. The bike is actually cool (sorry Rivendell, no matter how hard you try nobody will ever consider your bikes or tan corduroy pants cool), and the attention to detail is fantastic.

Velo Orange has all of the attachment points and frame angles figured out to make touring a breeze. The tubing is nice quality, so the bike ends up a bit lighter than a Surly (and the finish is better looking and more durable as well).

Available as a frameset or a complete bike. 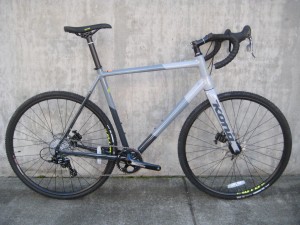 Kona has produced a cyclocross bike for over twenty years now. Early versions were notable for their versatility and modern design. Sometimes the bicycle reviewers were critical of Kona for not being “Euro” enough. Review writers would ding them for having things like water bottle cage mounts or fender eyelets on a racing bike. They would bemoan Kona’s do-everything approach to a bike that was supposed to be raced for 45 minutes a weekend during the autumn and early winter and then sit in the garage for the rest of the year.

These days we applaud versatility.

Like previous Jake the Snake models, this one handles great and is built with an impressive array of smart and durable component choices. You still get a bike than is fast and light (feel free to race it on the weekends), but the versatility has just gotten better over the years. You now get TRP hydraulic disc brakes instead of cyclocross cantilevers so you can actually stop the bike on steep descents or when you’re carrying heavy cargo. The Sram 1x drivetrain has a broader gear range than the cross bikes of twenty years ago, so you can ride up the hills that you used to have to walk, and you can keep up to speed on fast road rides as the top end of the gear range is now similar to that of a road-only racing bike.

Another thing that has changed since the late ’90′s? We can sell you a Kona Jake the Snake instead of telling you why the cyclocross model that we stock is almost as good. 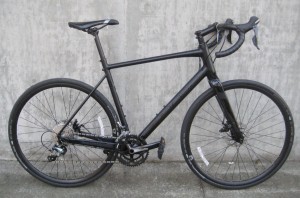 In case you’re not familiar with the term, Gestalt is a whole that is more than the sum of its parts.

Marin named these bikes quite well. These are great bikes that give you more than the component list (or the prices) would suggest.

The Gestalt series aluminum frame is smooth and light (actually a bit lighter and springier than the steel Marin Nicasio or Fuji’s Sportive frame). It also comes with a fender and front-rack ready fork. The Gestalt versions that have mechanical (as opposed to hydraulic) brakes rely on the powerful Tekro Spyre models. 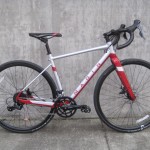 All of these bikes feature internal cable runs and the fabulous 30mm Schwalbe G-One tires. In order to keep the prices reasonable, the Gestalt 1 comes with Shimano Sora components. The Gestalt 2 is equipped with a carbon fork and Shimano Tiagra drivetrain.