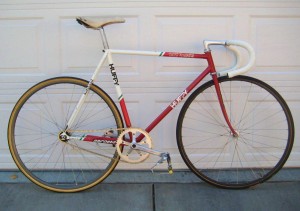 This track bike shows off the unusual complexity of running a professional bike racing team in the 1980′s.

First off, we have the sponsorship issue.  The 7-Eleven team had Huffy as their bike sponsor in 1987 and 1988.  Huffy didn’t supply the bikes, however, they supplied money to help run the team.  From a distance, the general public would assume that Huffy was making bicycles for Olympic level cyclists and that they could walk into a local K-Mart or Target and buy a similar bike off of the shelf.  Now if an avid cyclist took a look up close, he would notice the small Serotta decal and figure out that a pretty well-known custom frame builder named Ben Serotta was actually making the 7-Eleven team bikes. 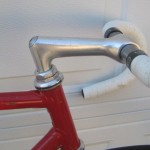 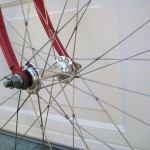 Another peculiarity involves the type of bike that we have here.  This is an endurance-event track bike, not a road machine.  The 7-Eleven team primarily did their racing on the road.  When it came time for a big international track race like the World Championships or the Olympic Games, the coaches for the U.S. team would recruit the best cyclists they could find.  So what you probably had with this bike is a 7-Eleven rider (Mark Gorski? Dave Lettieri?) who was recruited to do the points race or the Madison at the World Championships. 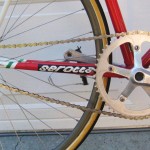 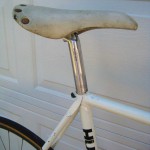 Now, was it a pro or an amateur?  In the 1980′s you could only race at the Olympics if you were still an amateur.  7-Eleven had a feeder squad for a while that raced track and road events.  The members of this part of the team maintained their amateur status so they would be eligible to compete at the ’88 Olympics.  If you saw these guys at a U.S. race, they would look like the same cyclists that were on television at the Tour de France, the big difference was that they were racing the poverty line as well as other athletes.

So put it all together.  What did we have?  What we probably had was a professional road racer who was underpaid so he could maintain his amateur status, competing on the track while wearing a U.S. team jersey, not a 7-Eleven jersey, pedaling a Huffy bicycle that was actually made by Serotta.