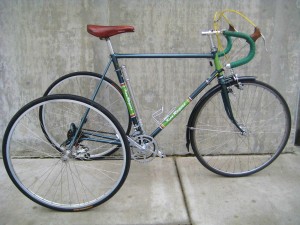 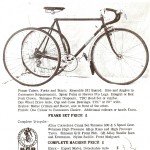 The museum collection has a number of British racing trikes, but nothing gets as much use as this late ’60s Ken Rogers.  This is one of Jeff’s regular rides.

Far from being a boring cruiser for old folks or a slow cargo transport on a factory floor, this trike takes real skill to ride.  Jeff has mastered the tight wheelbase, lightning-fast steering, and unpredictable traction (the right side differential was designed for riding on the left side of British roads). 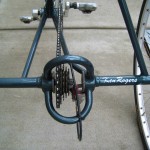 The freewheel and the differential

Why would it be hard to ride a tricycle?  Imagine riding a sailing catamaran on the road.  Like a catamaran, the trike won’t lean into a turn, but will lift a side up into the air.  Handling can be extremely quick with a wheelbase about 2 inches shorter than on the average racing bike.  Crowned roads demand that you lean toward the centerline while riding.  Simple turns can become tippy, exhilarating  stunts.

Oddly, at the same time you get that daredevil feeling while riding, you can also feel supremely stable.  Riding up a steep road can bring you to a standstill, yet you won’t tip over.  Ice or wet moss on the road pose little danger to the tricycle rider. 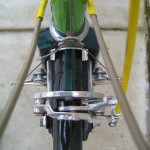 Two brakes on the front wheel 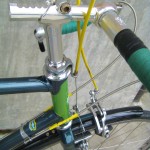 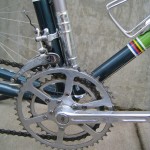 French components on a British trike