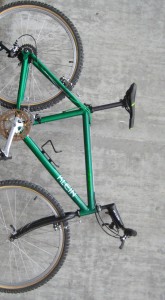 A tribute to the most famous bike on television

This is our tribute to the most famous bike in American pop culture.

The original was a model from 1987, built up with mostly Suntour XC pro equipment, a Klein Mission Control 1-piece handlebar and stem, pedals with toe clips, an Avocet gel saddle and a black cromoly rigid fork (which was installed backwards for the better part of a year).

Millions of people saw the bike that we’re talking about every week. Laughed at it, actually.

A blue Cannondale was called in as an understudy when the original Klein was stolen from the set.

It can currently be seen nearly everyday in syndication.

No idea what we’re talking about?

No bike for you! Next!

Alright, if you didn’t watch TV in the 1990’s and find this little riddle irritating, here’s the answer: 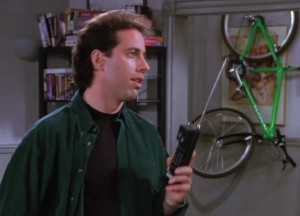 For five seasons a bike like this one was in the background every time Kramer made an entrance, George had to kvetch, or Elaine and Jerry discussed really nothing at all.
As far as we can tell, it was only removed from its hallway hook in one episode (Jerry’s nudist girlfriend tunes it up, leading Jerry to mention that the bike was really only for show).