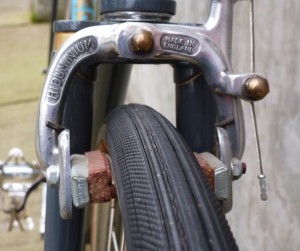 Bicycle brakes don’t get much love.

You typically don’t gush to your riding buddies about being able to stop.  Instead, the latest shifting gizmos earn your praise.  You’ll boast about your wheels or talk about a new carbon fiber handlebar making the ride so enjoyable.  Mountain bikers love suspension, but would they ever thank disc brakes for making their suspension design possible?  Cyclocross riders might mention that their brakes are quiet, but will quickly change the subject to discuss the air pressure in their tires.

Bicycle brakes deserve our love and attention, they’ve always been there for us.  Let’s take a look at some great brakes from the past 100 years, and see how progress leaps forward in starts and stops. 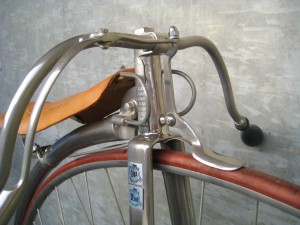 Pull the handle and the spoon slows the wheel

The first bicycles came into existence before the invention of pneumatic tires.  Smooth solid rubber tires provided a nice even surface that early spoon-style brakes would press into and slow down your Penny-Farthing.  While early cyclists appreciated the ability to stop, they didn’t like the harsh ride of hard rubber tires.  As soon as squishy air-filled tires (with tread) became the norm, cyclists needed a stopper that didn’t touch the tires.

Coaster brakes, like we see today on children’s bikes and beach cruisers, haven’t changed much since their inception.  Packed into the rear hub shell, the mechanism stays away from the elements and provides solid stopping power activated by a simple change in pedaling direction. 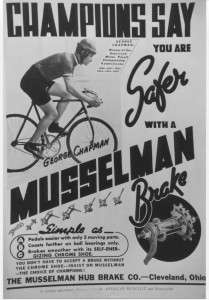 Coaster brake designs usually employ wedge-shaped shoes or a series of plates that will drag on the hub shell, slowing the spinning wheel.  The problem with coaster brakes is heat.  A long downhill can make the hub red hot, liquefying the bearing grease and producing a cloud of smoke.  Obviously a smoking hot coaster hub won’t stop a bike very well, and cyclists encountering long downhills have to take frequent breaks to let their hubs cool down.  An old tip for touring cyclists with coaster brakes suggested that they drag pine boughs like anchors in order to keep their speed in check.

Drum brakes have been around as long as coasters, and they have similar strengths and weaknesses.  On the plus side, drum brake hub shells are generally bigger, which helps dissipate heat, and they are activated with a cable and hand lever, instead of pedal action.  The big minus is that they are tricky to incorporate into bicycle designs, as they require long torque arms that could stress lightweight frame and fork tubing.

Brakes that squeeze on the rim seem like a better way to go.  They’re lighter than hub brakes, most of the designs are quite simple to make, there’s no problem with heat build-up, and they make removing a wheel to fix a flat tire much easier. 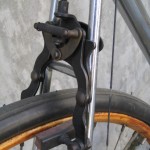 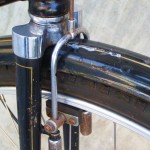 Rod brakes pull up on the underside of the rim

Rim brakes have come in many varieties over the years. A common design element in the 1920′s and ’30′s was to use cork or felted wool pads that would drag smoothly across lacquered wooden rims.  For heavy bikes with slippery chromed-steel rims, stout brake calipers had to be made that could crush into the hard steel.  Hard rubber pads slowed steel rims the best.

Rod-actuated calipers, which used thick metal rods instead of thin brake wires for actuation were typically found on heavy Dutch-style utility bikes that sit out in the weather. Rod brakes, while being pretty powerful, didn’t give bike riders much flexibility.  A simple change in handlebar height required one to completely rework the brake set-up. Rod brakes pull up into the rim instead of squeezing the sides, so these brakes are also in the way when you have to fix a flat. 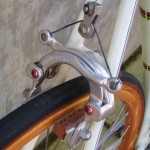 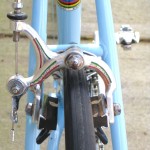 If you were a bike racer fifty years ago, the big debate amongst your friends would have been side-pull vs. center-pull calipers.  Center-pull calipers from Universal or GB stopped great (if you were looking for that feature in a brake), but they weren’t as light or sleek as side-pulls from Campagnolo.  Side-pull calipers omitted the center-pull’s hard-mounted cable stops on the frame and the extra straddle wire. 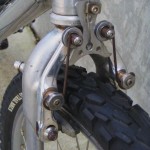 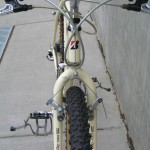 The rising popularity of mountain biking in the 1980′s provided the demand for newer, more powerful brake designs.  The first mass-production mountain bikes came with cantilevers (and motorcycle brake levers).  They stopped alright, but took a lot of hand strength.  Roller-cam brakes, first designed by mountain bike icon Charlie Cunningham, had more leverage than cantilevers but were tricky to set up.  Shimano came out with the U-brake, a U-shaped block of aluminum which bettered the stopping power of cantilevers as well, but they mounted under the chain stays where they would collect mud and grease.  These U-brakes were not bike-mechanic favorites, and were soon replaced by Shimano’s linear-pull V-brakes.  V-brakes (which resemble more of an “H”) provided even more power and the rear brake mounted back in the normal spot on top of the seat stays. 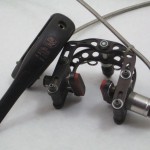 Hydraulic road brakes aren’t as new as SRAM would lead you to believe.  Washington-based Mathauser and the German Magura company developed hydraulic road calipers in the 1980′s.  The designs were powerful and they worked well, but without carbon fiber rims (and their irregular braking surface) driving demand for more powerful road brakes like we have today, these designs failed to find a market.  Instead, the ’80′s were all about aerodynamics and style (stopping power was secondary).  Campagnolo took great advantage of this atmosphere with their heavy and under-powered Delta brakes.  Deltas, with their sleek and shiny futuristic look heralded the modern age of bicycles.  While riders loved their Delta brakes and everyone talked them up, it was superficial.  We just loved them for their looks. 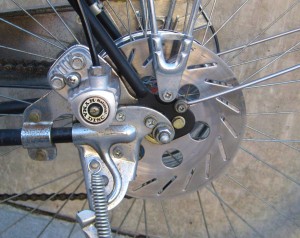 If any brake is feeling the love these days, it’s the disc brake.  Believe it or not, people have dabbled with discs brakes on bicycles since at least 1950.  Schwinn Manta-Rays had cable-actuated versions in 1971.   In the mid-1970′s, Shimano had a line of hydraulic brakes that ended up on utility bikes of the era.  These disc brakes added about 8 pounds to the weight of the bike, but they stopped pretty well and sure looked cool.  Earlier disc versions probably didn’t take off simply because we didn’t need them.  Caliper brakes rubbing on aluminum rims stopped bikes that were being ridden on the road just fine.

It took the advent of mountain biking, with steep off-road trail gradients to make us yearn for the power you could get from hydraulic discs.  Disc brakes also freed mountain bike suspension designers from the constraints that wire cable runs and cantilevers brake posts placed upon them.

Today we can stop with confidence thanks to refined designs, great materials and 100 years of dealing with brakes that didn’t work so well.

The next time someone asks you about your bike, make sure you give your brakes some praise.