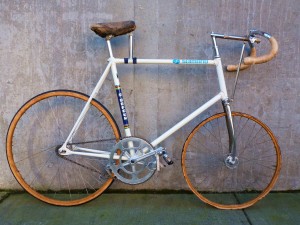 Throughout the early 1970′s this bike could be seen in motorpaced track events throughout Europe.

It’s odd-looking, we know.  This bike is called a “Steher” (say “Stayer”). Stehers are employed in extremely fast track events where racers draft behind motor bikes (actual motorcycles or moped-style machines called dernies).  The small front wheel gets the rider tucked into the slipstream even tighter than on a normal bike.  The reversed fork and reinforcement struts are meant to make the bike very stable with the rider positioned so far forward on the bike.

This bike, while labeled for Robert DeFour’s bike shop in Zedelgem and sponsor Shimano, is actually a Swiss bike that came from the shop at the Oerlikon velodrome in Zurich. 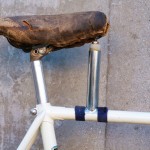 We have a winner! The ugliest bike saddle in the world 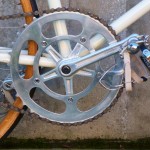 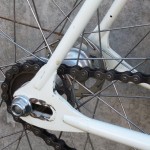 American pro Tom Sneddon competed on this bike for the Swiss Willner team in 1974.  He partnered with motorpacers Erwin Brazerol and Ulli Luginbuhl.

Tom later became part of the American Shimano team (Shimano’s first sponsorship deal outside of Japan).  In 1975, Tom raced as many days a week as you or I would go to work.  That year he competed in 75 different events, riding 32,000 miles in the process, and finishing in the money a third of the time. 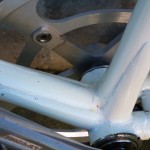 Reinforcements all around the bottom bracket 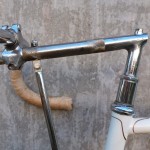 With a stem this long you need a brace 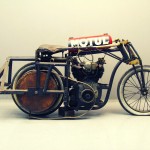 A 1928 BAC pace motorcycle like used at the Zurich Velodrome

The bike racing calendar was quite full in northern Europe in the ’60′s and ’70′s, and Tom found himself competing on a regular basis with  the stars of the era like Freddy Maertens, Roger DeVlaminck, and even Eddy Merckx (who Tom managed to finish in front of a handful of times).

Track racing drew big crowds and spectators would bet on their favorite racers.  An American in the mix would have been quite a draw in the 1970′s.