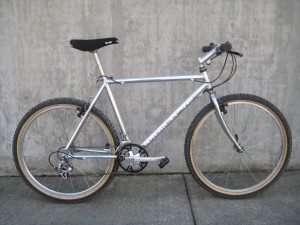 American Bicycle Manufacturing was a brand that made beautiful, cutting-edge mountain bikes in St. Cloud, Minnesota from the early ‘80’s through the mid ‘90’s.

ABM was well known in the mountain bike world for coming up with novel ideas and then figuring out how to produce them. They manufactured polished and anodized aluminum bike frames at a time when painted steel was the norm. Their Montanaous model was one of the first modern-era bikes to have adjustable frame angles (change the head angle by changing the headset placement). The modern bike shop parts procurement nightmare, the replaceable derailleur hanger? American was really the first sizable company to incorporate the feature into every model. For a trade show in the early ‘90’s, ABM built a mountain bike frame out of super-light Beryllium tubing. 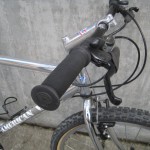 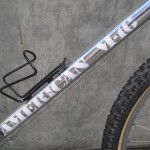 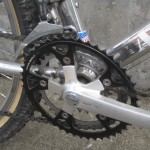 The 2 pound mountain bike frame never made it into real production as they really couldn’t produce frames out of the dangerously toxic metal for less than $25,000 each.
False starts and misteps aside, American Bicycle Manufacturing was ahead of the curve.

American was the original sponsor of the Chequamegon Fat Tire Festival in nearby Hayward, Wisconson.  The festival today is one of the biggest and oldest off-road races in the world, drawing over 2500 participants into the woods each year. 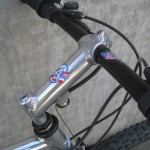 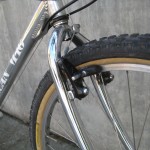 No suspension this model year 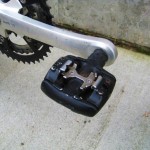 Unfortunately, American Bicycle Manufacturing did not survive the mountain bike boom.  As a builder for other manufacturers as well as for their own brand, American sometimes lost market share and intellectual property to their own customers.   In 1993, a deal to produce tandems for Specialized fell through, leaving American with over 200 tandem frames they couldn’t sell. 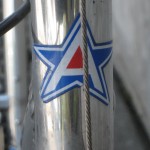 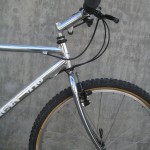 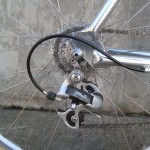 This particular American M-16 features all of 1990’s best mountain bike bits. It has the Shimano Deore XT component group with 21 speed indexed shifting, the new 2-finger XT brake levers, round (and oval Biopace) black anodized chainrings, Shimano SPD pedals and black cantilever brakes… And a Hite Rite!
Do you have a dropper seatpost on your new mountain bike? This bike has the original. 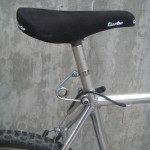 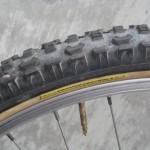 A Breeze & Angel Hite Rite seat adjuster is clamped around the Suntour XC seatpost. Just flip the quick release lever, let your weight push the saddle down and then re-tighten the quick release when you had the saddle at the right height. Just be carefull when you want the seat to go back up, the spring shoots the saddle back up pretty quickly…