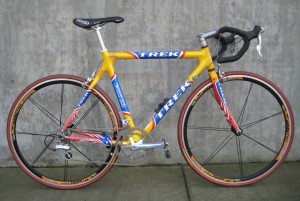 This is a Trek 5500 racing bike from the year 2000. The gaudy paint job and 1999-bike limited run commemorates Lance Armstrong’s victory at the ’99 Tour de France.
Oh, sorry. I meant to redact the name. That should read “L**** A********’s” 1999 Tour de France victory.
No matter how the history books record the results, Trek was pretty proud that the Tour was won aboard their creation, a fairly stock model 5500 OCLV carbon road bike.
Trek’s OCLV carbon framesets were about 5 years old by the year 2000, yet they were still at the cutting edge of technology. OCLV stood for Optimum Compaction, Low Void. The label was more than marketing hype. Trek used high grade carbon material and superbly engineered tooling to mold each lug and tube. This construction method, which took frame construction in small steps instead of trying to create an entire bike frame at once, reduced the amount of epoxy and fillers left over inside the completed frame. The carbon molds squeezed the tubes extremely tight, reducing the size and number of “voids”, and leaving them with “optimum compaction” of the material. 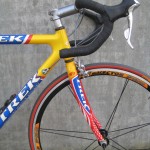 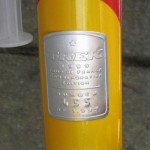 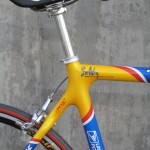 The Dura-Ace 7700 components on this bike were in the middle of their life cycle at the time. The 7700 crank arms were the first hollow arms that Shimano managed to produce, and the Octalink bottom bracket began an era of constantly changing bottom bracket standards that continues today. 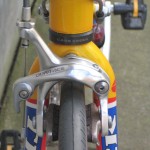 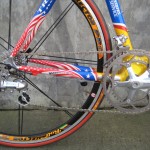 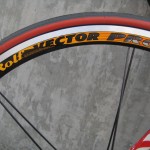 Paired spokes were all the rage

The 9-speed rear derailleur and shifters from this component group set the standard for precise and reliable shifting, and it took the introduction of Di2 electronic shifting in 2012 to surpass the 7700 group as a benchmark. 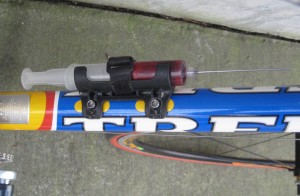 In case of emergencies, fresh blood

Sharp eyes will notice that this is no Tour-winning replica. Lance’s bikes would have been outfitted with sponsor-correct Mavic wheels, Shimano seat post, Chris King headset, Dedacci handlebars and handlebar stem. Those U.S.P.S. Cycling Team parts are replaced with Trek’s house-brand Icon equipment and Rolf’s paired-spoke Vector Pro model wheels on this over-the-counter bike.
Speaking of over-the-counter vs. prescription equipment, check out the special team-issue rocket booster on the down tube…