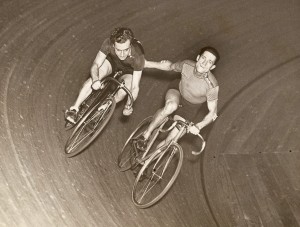 Alf LeTourneur was an exciting racer to cheer for (and a good bet) during his professional career.  From 1928 to 1942 it was likely that the track event you were watching would be won by a team that included Alf “The Red Devil” LeTourneur.

Born in France, Alf moved to the U.S., and represented us well as the National Champion for four straight years, from 1932 through 1935.  He won a total of twenty-one Six Day races (which is equivelant to twenty-one grand tour and classics victories these days). 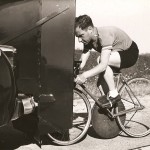 A test attempt at the speed record 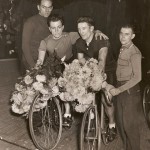 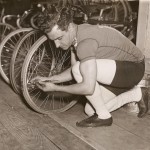 A posed shot. Look closely, the tire Alf is checking is flat

In 1938, Frank Bartell’s human-powered speed record of 80.5mph fell to Alf.  The Red Devil then went on to beat his own record again in 1941 when he rode his Schwinn Paramount behind a pace car to the astonishing speed of 108.92 miles per hour!