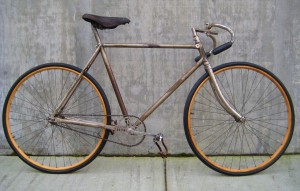 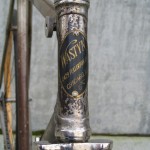 In 1910, Belgian bicycle builder Emil Wastyn emigrated to America.  Emil opened a small bicycle store on Fullerton avenue in Chicago and began an American cycling dynasty that would last more than a hundred years. 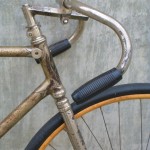 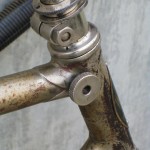 The knob damps the steering response

In 1941, Alf Letourneur piloted his Wastyn-made Paramount to a motor-paced speed of 108.92mph, breaking Frank Bartell’s six year old record in the process.

This sturdy relic has some interesting features.  Up on the head lug we have a knob that tightens down on the steerer tube of the fork, damping the steering response.  Also unusual for the time are the rear stays that make up the back of the bike, which are built of triangular shaped tubing.  Lastly, the top tube has a slight downward slope which positions the racer in a low aerodynamic crouch when gripping the bars. 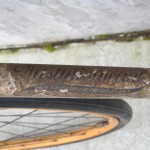 The original decal is too fragile to restore 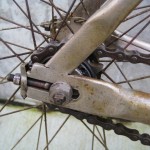 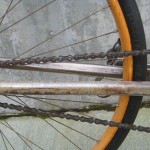 If the Wastyn name sounds familiar, you have been paying attention.  Emil built the very first Schwinn Paramount in 1937, and Oscar Wastyn sr., Emil’s son, took over Schwinn’s high-end construction division in the 1940′s.  Emil’s grandson, Oscar jr. and great-grandson Scott are the current owners of Wastyn Cycles in Chicago.  The store is still humming along at 2634 Fullerton avenue, just two blocks from the original location.