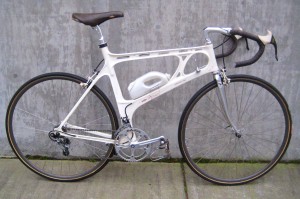 Frank Kirk thought up this remarkable road bike while working as a designer at the Ford automobile plant in Dagenham, England.

The story that we hear most often is that the cast bumpers on the Ford Sierra were the inspiration for these bikes.

Clearly the construction method is atypical. The material is different too. This I-beam style frame is made out of cast magnesium, a highly flammable material that required a dramatically different approach to frame design and construction than typical when using round steel or aluminum tubing. 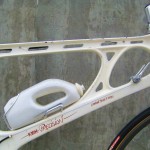 It took only 8 seconds to mold one frame 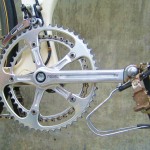 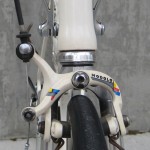 Magnesium is one of the lightest metals by volume, and although its rigidity is quite a bit lower than steel it should be a terrific ingredient for bicycle manufacturers.  While magnesium can be flammable and prone to corrosion if not painted correctly, magnesium as a material is inexpensive and extraction is environmentally friendly. 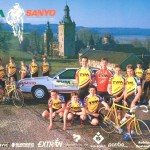 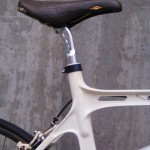 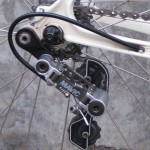 Kirk boasted that a cubic meter of seawater contained enough magnesium to make a bike frame (although a tremendous amount of electricity is used in the process).  Unfortunately, Kirk was plagued by manufacturing problems, and the Kirk precision disappeared by 1995.

In it’s era, the Kirk precision wasn’t just a gimmick, it was a real racing bike. Phil Anderson and other members of the TVM team rode Kirk Precisions in the pro peloton, and the bike made an appearance in the Tour de France in the late ‘80’s.

An urban legend goes that a Kirk Precision was involved in a crash in the English countryside.  The flinty nature of the pavement produced sparks, which ignited the magnesium frame…. Still haven’t found any reliable sources to back up this story…