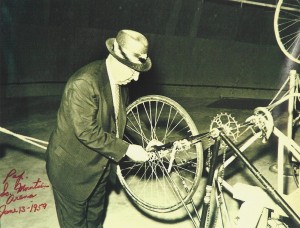 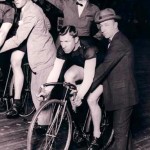 John “Pop” Brennan was a master mechanic and framebuilder.  He worked at Madison Square Garden and other venues during the six-day races, and built bicycles out of his Newark, NJ workshop for many of the best racers of the day, including Bill Honeman, Frank Kramer, Tino Reboli, Micky Franciose, Charlie Logan, and Alf Goullet. 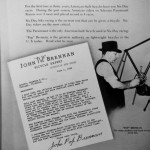 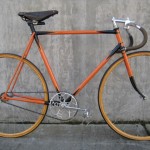 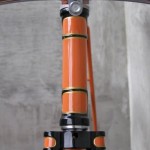 The bands around the head tube mark this as a Brennan 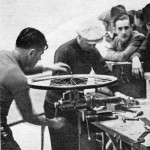 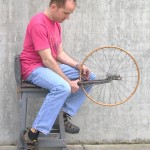 Pop sat here and built many a wheel.

Pop began his metal working career as a chandelier maker. He learned the fine art of tube bending and joinery while fabricating exquisite chandeliers for theaters in New York and other major cities. Later he used this skill to bend steel for handlebars and frames.  He understood the mechanics of the machine and the needs of the rider.  Bikes were built for their intended use, whether it was for road events, track sprint events, or six-day racing.  Brennan frequently built multiple forks for riders to change the handling of the bike by simply changing the fork.   Pop built bicycles from 1920 through the late 1950′s.

We have many fine examples of Pop’s work in the classic bike museum, including Frank Turano’s and Bill Honeman’s bikes.  We also have his workshop vice, wheelbuilding stool, handlebar-shaping forms, and his chandelier-making tools.