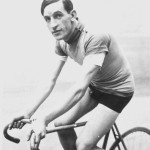 Willy Appelhans is in our museum  mainly for his accomplishments as a bicycle builder, but before becoming a frame builder, Willy Appelhans was an accomplished racer himself.  Born in Germany in 1889, Willy came of age during the racing boom of the early 20th century.   Appelhans raced proffesionally from 1911 until 1923 for his native Germany,  for France with six-day track partner Alcide Rousseau, and for the U.S. after he emigrated to New York.  Appelhans raced quite a few six-day races , and was considered “sprinter” to partner Rousseau’s “stayer”. 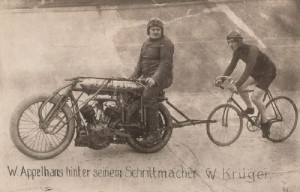 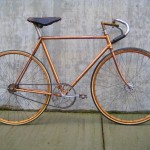 Appelhans set up shop in New York building bikes, and is considered one of the greats of the era.  Lance Claudel apprenticed with Appelhans, and the two of them built some of the coolest bikes.